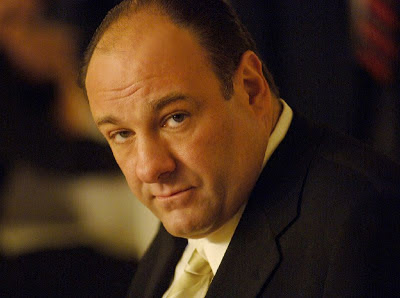 James Gandolfini died like his last lines in the final scene of The Sopranos, remembering the good times, but this world class actor deserves far more accolades than just his role of Tony Soprano, for many thought that what he brought to television was what Brando brought to movies ~ himself: Allen L Roland

"I have lost a brother and a best friend. The world has lost one of the greatest actors of all time." - Musician Steven Van Zandt, who played Silvio on "The Sopranos."

James Gandolfini was a deep and complex man who loved his acting craft and left a legacy of work that some have compared to Brando at his best. Owen Glieberman, Movie critic for Entertainment Weekly, was one of those who thought as such as he recently wrote on EW.com;
" For on The Sopranos, Gandolfini’s artistry was personal in the highest sense. His performance as Tony was a kind of ongoing everyday torn-from-reality gangster-as-normal-guy Method psychodrama. Gandolfini put his demons out there, and used them, and fused them with the character he was playing in a way that made Tony seem as large as a planet, as rich and interior as any character in a novel…. And that’s how his performance as Tony heightened the canvas of what acting on television could be, in much the same way that Marlon Brando, starting in the early ’50s, turned his brooding brand of confessional Method performance into a one-man acting revolution that changed Hollywood ~ and, in an Elvis-like way, the very rhythm in the Western world…As Tony, Gandolfini spilled his guts and then some, so it was no wonder that in doing so he changed the landscape of television. Gandolfini’s emotions spilled over the sides of Tony as a character, and he scorched the earth with those emotions….He made it the role of a lifetime, and made the role so large that that was enough to make him the Brando of television. It was his The Wild One, The Godfather, and Last Tango in Jersey all rolled into one."   See full article: http://popwatch.ew.com/2013/06/22/gandolfini-was-the-marlon-brando-of-tv/
Here are some wonderful interview videos of Gandolfini discussing his life and work with James Lipton ~ taken inside the actors studio and surrounded by adoring fellow actors and mentors. It's well worth 44 minutes of your viewing time, but Gandolfini's tip to the acting students in the last four minutes is especially meaningful to me because it's the same message that I impart to my clients ~ Believe in yourself and above all, don't sell out on yourself .
http://www.elephantjournal.com/2013/06/i-guess-you-never-hear-it-coming-when-its-your-turn-rip-james-gandolfini/

David Chase's brilliant and controversial last scene of the Soprano's was an understated masterpiece for it was filmed from Tony's visual perspective ~ for indeed the ultimate fade to black is death. Think of death like falling into a long black tunnel ~ a tunnel that leads to a point of light and singularity where all notions of time and space break down and we become one with the Unified field and a blissful state of love and soul consciousness.

But I digress ~ obviously the customer with the jacket who passed Tony's table on the way to the men's room was his killer, who was waiting for the whole family to be together before he struck, so when Meadow hurriedly entered the restaurant and Tony looked up in recognition ~ the assassin's bullet was just entering his brain and from Tony's perspective everything went black.
Instead of showing a table spattered with Tony's blood and brains with his wife and children screaming in horror as the gunman brushed aside Meadow and ran out the door having accomplished his retaliation ~ Chase chose to take it from Tony's perspective and left the rest to our imagination.

So once again, watch the final scene of The Sopranos and admire the end of a finely crafted David Chase masterpiece as well as a brilliant actor prophetically suddenly fade to black at the peak of his career.
Final episode / The Sopranos / 4 minutes
https://www.youtube.com/watch?v=rnT7nYbCSvM

"He was a genius. Anyone who saw him even in the smallest of his performances knows that. He is one of the greatest actors of this or any time. A great deal of that genius resided in those sad eyes. He was my partner. ... He was my brother in ways I can't explain and never will be able to explain." - David Chase, creator of "The Sopranos."