BIRTH OF A STATE / DEATH OF APARTHEID 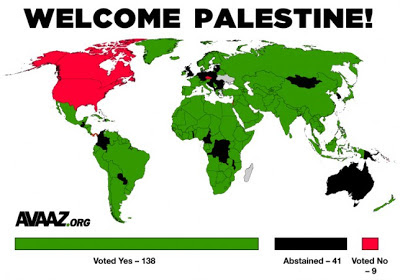 
As a citizen of the world, I extend a long awaited welcome to the state of Palestine with the firm hope that this small step for an oppressed people will become a giant first step towards peace and reconciliation in the Middle East and the death of apartheid: Allen L Roland

"The General Assembly is called upon today to issue a birth certificate of the reality of the state of Palestine."
MAHMOUD ABBAS, President of the Palestinian Authority, before a vote granting Palestine the upgraded status of nonmember observer state at the United Nations.

The birth of the STATE of Palestine was long overdue and there were many obvious birth complications ~ but there is no questions it was wanted by the vast majority of the world as witnessed in the historic recognition of statehood vote at the UN ~ where 138 members voted yes, 41 abstained and only 8 ( including Israel, Canada, the US and 4 of its Pacific Island protectorates) voted no.

The times, they are a changing !

Here's a 6-minute animation that explains what Israelis and Palestinians are fighting over. It’s not meant to be comprehensive, but it is meant to give you a tool to frame the conflict as one about the struggle for equal rights to the land, the vote, the roads, the resources. And it offers why one of the important tools to move toward a solution is the Boycott, Divestment and Sanctions movement.
http://www.youtube.com/watch?v=Y58njT2oXfE&feature=youtu.be

But let's turn to Uri Avnery ~ the long term leader of the Israeli peace movement Gush Shalom ~ for his valuable and important insider perspective on this historic moment: " ON FIRST sight, nothing much has changed. But only on first sight. What has happened is that the foundation of the State of Palestine has now been officially acknowledged as the aim of the world community. The “Two-State solution” is now the only solution on the table. The “One-State solution”, if it ever lived, is as dead as the dodo.
Of course, the apartheid one-state is reality. If nothing changes on the ground, it will become deeper and stronger. Almost every day brings news of it becoming more and more entrenched. (The bus monopoly has just announced that from now on there will be separate buses for West Bank Palestinians in Israel.)
But the quest for peace based on the co-existence between Israel and Palestine has taken a big step forwards. Unity between the Palestinians should be the next. US support for the actual creation of the State of Palestine should come soon after."
See article:
http://www.arabnews.com/palestine-vote-strong-and-sweet

How ironic that in this 2012 year of transition, we have birthed the state of Palestine ~ much like the Christ child over 2000 years ago ~ and now we have a shared responsibility to ensure and protect its health through the Boycott, Divestment and Sanctions movement.

The BDS movement has been successful in drawing attention to Israel as a state deserving of the same treatment as once evidenced with apartheid South Africa ~ whereas prominent individuals such as former U.S. President Jimmy Carter, South African Archbishop Desmond Tutu, UN Special Rapporteur on Human Rights Richard Falk and many others, have used the term apartheid at various moments to refer to Israel’s regime of gross violations of international law. Apartheid has come to hold a specific legal definition that was adopted by the 2002 Rome Statute of the International Criminal Court (ICC) and that has its basis in the 1973 International Convention on the Suppression and Punishment of the Crime of Apartheid.
Under the Convention, the crime of apartheid is defined as “a crime against humanity . . . inhuman acts resulting from the policies and practices of apartheid and similar policies and practices of racial segregation and discrimination, as defined in article II of the Convention, are crimes violating the principles of international law."
Article II of the Convention defines the crime as “inhuman acts committed for the purpose of establishing and maintaining domination by one racial group of persons over any other racial group of persons and systematically oppressing them,” and also includes “similar policies and practices of racial segregation and discrimination as practiced in southern Africa.”

Based upon the definition of apartheid under international law, it becomes clear how and why Israel qualifies as an apartheid state vis-à-vis the Palestinians.  In the West Bank and Gaza, the Israeli occupation has developed into a pervasive system of apartheid, which includes checkpoints, the Wall, house demolitions, destruction of property, denial of access to education, arbitrary imprisonment, and Israeli-only roads. Israel’s apartheid policies also extend to the Palestinian refugee population expelled from their lands in 1948 to make room for the creation of the state of Israel ~ in refusing to permit the return of these refugees Israel is in violation of Article 2c of the apartheid convention adopted by the ICC … See more http://muftah.org/understanding-the-boycott-divestment-sanctions-movement-against-israel/ 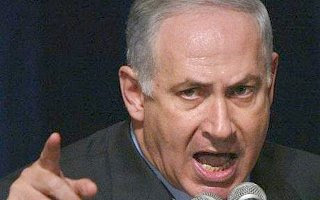 Israeli Prime Minister Benjamin Netanyahu said the UN General Assembly vote implicitly recognizing Palestine as a state was “meaningless” and will do nothing to realize actual statehood. “This is a meaningless resolution that won’t change anything on the ground. No Palestinian state will arise without an arrangement ensuring the security of Israeli citizens,” Netanyahu on Thursday.
Netanyahu in essence has said that no Palestinian state will ever arise, so long as Israel has anything to do about it ~ Netanyahu and his right-wing Likud Party, obviously dream of a Greater Israel with full sovereignty over the territories currently recognized as Palestinian in the West Bank and Gaza.

Meanwhile, Apartheid continues as Israeli police have begun removing Palestinian passengers from buses at the request of Jewish settlers, the Israeli daily Haaretz reported ... and an army reservist told Haaretz that Israeli police stationed near Salfit had ordered Palestinians off buses multiple times, leaving them to walk several miles and then catch taxis home.

Unfortunately, Apartheid is a way of life in the West Bank where Settlements exclude Arabs and Jews only roads already exist and it even extends to sports ~ ESPNs Jeremy Schaap traveled to Jerusalem to report on those who have been called "the most dangerous fans" in Israel soccer as well as BEITAR - an Israeli Soccer Team which has been called the MOST RACIST on the planet. See 12 minute video ~
http://www.youtube.com/watch?v=DKQHhed3djU

Israel has also seized more than $120m (£75m)in tax revenues it collects on behalf of the Palestinian Authority in response to last week's overwhelming vote at the UN general assembly to recognize the state of Palestine. See story ~
http://www.informationclearinghouse.info/article33199.htm

But the angry words and unjust actions of Netanyahu and the Israeli right wing Zionist zealots cannot stop a world coming to terms with its innate urge to unite and cooperate with each other ~ while isolating any gross impediments (such as apartheid) through the already proven methods of the Boycott, Divestment and Sanctions movement.

It is now time for conscientious people around the world to do more than just pay lip service to the Palestinian struggle for justice and freedom, and to advocate and implement comprehensive boycotts against Israel’s apartheid policies ~ As Sami Hermez wrote ~ "the Palestinians deserve no less than the dignity for which they have so patiently waited and struggled for over the last 60 years."

While we celebrate the long awaited birth of the state of Palestine we must ensure the death of apartheid as currently practiced by the state of Israel.
"The UN took a strong stand against apartheid; and over the years, an international consensus was built, which helped to bring an end to this iniquitous system. But we know too well that our freedom is incomplete without the freedom of the Palestinians." Nelson Mandela
~ Address at The International Day of Solidarity with the Palestinian People ( 1997 )

Allen L Roland is a practicing psychotherapist, author and lecturer who also shares a daily political and social commentary on his weblog and website allenroland.com He also guest hosts a monthly national radio show TRUTHTALK on www.conscioustalk.net
Posted by Allen L Roland, Ph.D at 11:49 AM