FALLING MAN OF 9/11 STILL CRIES OUT FOR JUSTICE 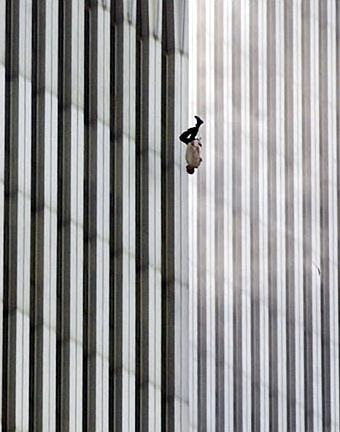 Jonathan Briley was the falling man of 9/11 and one of 200 jumpers who leaped to their deaths on that infamous day in 2001. His image captured by Richard Drew continues to shock and it still demands the truth and justice for those who perpetrated or allowed this treasonous operation and carefully orchestrated cover up to occur: Allen L Roland

The most despicable act of American treason was the 9/11 official attack storyline and carefully orchestrated cover up which continues to this day. The Obama administration is still determined to keep this bamboozle covered up and is, as such, is complicit in hiding the truth of 9/11.

Nothing captures the sheer horror of that day more graphically than Richard Drew’s photo of the falling man ~ later identified as Jonathan Briley.

Two years ago, the New York Post published a 9/11 macabre human remains map in trying to determine the physical scope of ground Zero as well as the human deaths, which obviously includes the over 200 Trade Tower jumpers along with the falling man, Jonathan Briley. 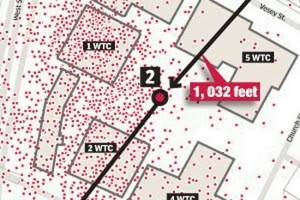 This New York post map is a graphic illustration of the human cost of that day for each red dot is a human being who was loved and cherished by someone and became an unnecessary victim of the most treasonous act in American history.
I watched again last night the brilliant and moving (70 minute) video THE FALLING MAN which has still not been released in the U.S. and which can be seen by clicking on ~ http://www.informationclearinghouse.info/article17405.htm .

Note also in this video at the 23:48 minute mark ~ detonation flashes are clearly seen below the smoke as the North Tower begins its collapse.

Is there a technology that can liquify structural
steel in seconds?

Yes, there is ~ Military-grade Nano thermite
and it's fully explained here in 6 minute video .
http://www.brasschecktv.com/page/20214.html

Hundreds of eye witnesses reported numerous explosions
inside the Twin Towers on 9/11.

The news media did an epic job of not following up
with any of them. Government studies ignored
them entirely.

It was Carl Sagan who wrote ~ " One of the saddest lessons of history is this: If we've been bamboozled long enough, we tend to reject any evidence of the bamboozle. We're no longer interested in finding out the truth. The bamboozle has captured us. It is simply too painful to acknowledge ~ even to ourselves ~ that we've been so credulous. So the old bamboozles tend to persist as the new bamboozles rise."

The 9/11 cover up is America's greatest bamboozle and many Americans are apparently no longer interested in finding the truth ~ for it would indeed be too painful to acknowledge.

9/11 Commission co-chair Lee Hamilton says "I don't believe for a minute we got everything right", and still believes that the Commission was set up to fail, that people should keep asking questions about 9/11, and that the 9/11 debate should continue.

9/11 Commissioner Max Cleland resigned from the Commission, stating: "It is a national scandal"; "This investigation is now compromised"; and "One of these days we will have to get the full story because the 9-11 issue is so important to America. But this White House wants to cover it up"

9/11 Commissioner Bob Kerrey said that "There are ample reasons to suspect that there may be some alternative to what we outlined in our version . . . We didn't have access . . . ."  He also said that the investigation depended too heavily on the accounts of Al Qaeda detainees who were physically coerced ( tortured ) into talking ( My note ~ this was Dick Cheney's trip to the dark side to cover up White House involvement )

And the Senior Counsel to the 9/11 Commission (John Farmer) - who led the 9/11 staff's inquiry - said "At some level of the government, at some point in time...there was an agreement not to tell the truth about what happened". He also said "I was shocked at how different the truth was from the way it was described .... The tapes told a radically different story from what had been told to us and the public for two years.... This is not spin. This is not true." And he said: "It's almost a culture of concealment, for lack of a better word. There were interviews made at the FAA's New York center the night of 9/11 and those tapes were destroyed. The CIA tapes of the interrogations were destroyed. The story of 9/11 itself, to put it mildly, was distorted and was completely different from the way things happened"

If even the 9/11 Commissioners don't buy the official story, why should anyone?

Former military analyst and famed whistleblower Daniel Ellsberg said that the case of a certain 9/11 whistleblower is "far more explosive than the Pentagon Papers". He also said that the government is ordering the media to cover up her allegations about 9/11. And he said that some of the claims concerning government involvement in 9/11 are credible, that "very serious questions have been raised about what they [U.S. government officials] knew beforehand and how much involvement there might have been", that engineering 9/11 would not be humanly or psychologically beyond the scope of the current administration, and that there's enough evidence to justify a new, "hard-hitting" investigation into 9/11 with subpoenas and testimony taken under oath.

A 27-year CIA veteran, who chaired National Intelligence Estimates and personally delivered intelligence briefings to Presidents Ronald Reagan and George H.W. Bush, their Vice Presidents, Secretaries of State, the Joint Chiefs of Staff, and many other senior government officials (Raymond McGovern) said “I think at simplest terms, there’s a cover-up. The 9/11 Report is a joke”

A 29-year CIA veteran, former National Intelligence Officer (NIO) and former Director of the CIA's Office of Regional and Political Analysis (William Bill Christison) said “I now think there is persuasive evidence that the events of September did not unfold as the Bush administration and the 9/11 Commission would have us believe."

A number of intelligence officials, including a CIA Operations Officer who co-chaired a CIA multi-agency task force coordinating intelligence efforts among many intelligence and law enforcement agencies (Lynne Larkin) sent a joint letter to Congress expressing their concerns about “serious shortcomings,” “omissions,” and “major flaws” in the 9/11 Commission Report and offering their services for a new investigation (they were ignored)

A decorated 20-year CIA veteran, who Pulitzer-Prize winning investigative reporter Seymour Hersh called "perhaps the best on-the-ground field officer in the Middle East”, and whose astounding career formed the script for the Academy Award winning motion picture Syriana (Robert Baer) said that "the evidence points at" 9/11 having had aspects of being an inside job."

The Division Chief of the CIA’s Office of Soviet Affairs, who served as Senior Analyst from 1966 - 1990. He also served as Professor of International Security at the National War College from 1986 - 2004 (Melvin Goodman) said "The final 9/11 Commission] report is ultimately a cover-up"

If even our country's top intelligence officers don't buy the official story, why should anyone ?

According to the Co-Chair of the Congressional Inquiry into 9/11 and former Head of the Senate Intelligence Committee, Bob Graham, an FBI informant had hosted and rented a room to two hijackers in 2000 and that, when the Inquiry sought to interview the informant, the FBI refused outright, and then hid him in an unknown location, and that a high-level FBI official stated these blocking maneuvers were undertaken under orders from the White House ( Dick Cheney again ? )

Current Democratic U.S. Senator Patrick Leahy said "The two questions that the congress will not ask . . . is why did 9/11 happen on George Bush's watch when he had clear warnings that it was going to happen? Why did they allow it to happen?"

Former U.S. Republican Congressman and senior member of the House Armed Services Committee, and who served six years as the Chairman of the Military Research and Development Subcommittee Curt Weldon has shown that the U.S. tracked hijackers before 9/11, is open to hearing information about explosives in the Twin Towers, and is open to the possibility that 9/11 was an inside job.

If there is bipartisan questioning of the official story, why isn't everyone questioning it?

U.S. General, Commanding General of U.S. European Command and Supreme Allied Commander Europe, decorated with the Bronze Star, Silver Star, and Purple Heart (General Wesley Clark) said "We've never finished the investigation of 9/11 and whether the administration actually misused the intelligence information it had. The evidence seems pretty clear to me. I've seen that for a long time"

Former Deputy Secretary for Intelligence and Warning under Nixon, Ford, and Carter (Morton Goulder), former Deputy Director to the White House Task Force on Terrorism (Edward L. Peck), and former US Department of State Foreign Service Officer (J. Michael Springmann), as well as a who's who of liberals and independents) jointly called for a new investigation into 9/11.

Former Federal Prosecutor, Office of Special Investigations, U.S. Department of Justice under Presidents Jimmy Carter and Ronald Reagan; former U.S. Army Intelligence officer, and currently a widely-sought media commentator on terrorism and intelligence services (John Loftus) says "The information provided by European intelligence services prior to 9/11 was so extensive that it is no longer possible for either the CIA or FBI to assert a defense of incompetence"

The Group Director on matters of national security in the U.S. Government Accountability Office said that President Bush did not respond to unprecedented warnings of the 9/11 disaster and conducted a massive cover-up instead of accepting responsibility.

Deputy Assistant Secretary of Defense under President Ronald Reagan (Col. Ronald D. Ray) said that the official story of 9/11 is "the dog that doesn't hunt"

The former director of the FBI (Louis Freeh) says there was a cover up by the 9/11 Commission.

If top government officials are skeptical, why isn't everyone ?

Numerous other politicians, judges, legal scholars, and attorneys also question at least some aspects of the government's version of 9/11.

David Ray Griffin, perhaps the leading scholar in the 9/11 Truth movement, made a plausible case in July in a 183-footnote open letter (http://www.ufppc.org/us-a-world-news-mainmenu-35/9849/) for the view that "Among scientists and professionals in the relevant fields who have studied the evidence, the weight of scientific and professional opinion is now overwhelmingly on the side of the 9/11 Truth Movement."

And finally, all the misinformation that became the 9/11 official story was laid down by the US news media within minutes after the attack. Here's the ten minute Video with those complete details: http://www.brasschecktv.com/page/92.html

Every abuse of power by the Cheney/Bush administration can be traced to the 9/11 false storyline and cover up and we, as a nation, will not be free until we fully investigate, uncover the evidence and prosecute the perpetuators of America's greatest bamboozle ~ no matter how difficult it may be to acknowledge this evil deed.

It was Schopenhauer who wrote ~ “The truth passes through three stages: First, it is ridiculed ~ Second, it is violently opposed and Third, it is accepted as being self-evident.”

In that regard, the recent self-serving, deceptive and revisionist history books by George W Bush, Donald Rumsfeld and Dick Cheney should be reminders to all Americans that the first casualty of war, and in particular illegal pre-emptive wars, is the truth.

Allen L Roland is a practicing psychotherapist, author and lecturer who also shares a daily political and social commentary on his weblog and website allenroland.com He also guest hosts a monthly national radio show TRUTHTALK on www.conscioustalk.net
Posted by Allen L Roland, Ph.D at 11:12 AM