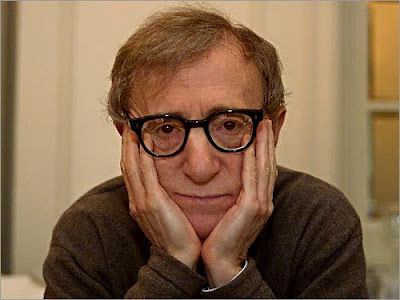 Woody Allen keeps churning out movies every year ~ some good, some great and some awful ~ but all of them the creation of a comic genius and much in the tradition of the immortal and irrepressible Charlie Chaplin: Allen L Roland

I refused to get sucked into the kabuki theater of the Republican and Democrat conventions with all their comic absurdities ~ from phony populism to empty phrases to empty chairs to empty coronations, empty words and blatantly false and outrageous roll call votes ( please see http://rt.com/usa/news/jerusalem-israel-dnc-vote-528/ ). Just another example of whose in control of our political process ~ which includes both political parties.

As wsws.org correctly writes ~ "As the Democratic Party wound up its charade in Charlotte as the party of “progress” and the “little guy,” it could not conceal the ugly reality of a party immersed in torture, criminal war and the wholesale assault on democratic rights of working people ~ all in the interests of defending the financial oligarchy’s monopoly of economic and political power."

Both Presidential Candidates are committed to maintaining the status quo and the obvious PLAN ~ a new world order cemented in the oligarchy's exclusive possession of economic and political power. That's why Geoge W Bush didn't panic on the morning of 9/11 and Obama hasn't panicked as his broken campaign promises destroyed his progressive base and litter the political landscape.

“You know what I’ve noticed? Nobody panics when things go ‘according to plan.’  Even if the plan is horrifying!”  The Joker

As such, I turn away from the theater of the politically absurd to two true comic masters of the absurd and realize that our own Woody Allen has slowly evolved into America's Charlie Chaplin. Both had similar paths to greatness, both followed their own intuition and both were troubled geniuses in their own right ~ and I define genius as someone embodying exceptional intellectual ability, creativity, or originality in their craft or occupation.

"All my pictures are built around the idea of getting in trouble and so giving me the chance to be desperately serious in my attempt to appear as a normal little gentleman."
~ Charlie Chaplin

Chaplin Chaplin's rise was a true rags-to-riches story. His father, a notorious drinker, abandoned Chaplin, his mother, and his older half-brother, Sydney, not long after his Charlie's birth. That left Chaplin and his brother in the hands of their mother, a vaudevillian and music hall singer who went by the stage name of Lily Harley.

For a few years, anyway, Chaplin's mother, who would later suffer severe mental issues and have to be committed to an asylum, was able to support her family. But in a performance that would introduce her youngest boy to the world of performance, Hannah inexplicably lost her voice in the middle of a show, prompting the stage manager to push the five-year-old Chaplin, whom he'd heard sing, onto the stage to replace her.

Chaplin lit up the audience, wowing them with his natural presence and comedic angle (at one point he imitated his mother's cracking voice) and the rest is history. See article ~
http://www.biography.com/people/charlie-chaplin-9244327?page=1

As a film maker, later like Woody Allen ~ Chaplin came to be known as a grueling perfectionist. His love for experimentation often meant countless retakes and it was not uncommon for him to order the rebuilding of an entire set. It also wasn't rare for him to begin with one leading actor, realize he'd made a mistake in his casting, and start again with someone new.

As for Woody Allen ~

" I made the statement years ago which is often quoted that 80 percent of life is showing up. People used to always say to me that they wanted to write a play, they wanted to write a movie, they wanted to write a novel, and the couple of people that did it were 80 percent of the way to having something happen. All the other people struck out without ever getting that wish. They couldn’t do it, that’s why they don’t accomplish a thing, they don’t do the thing, so once you do it, if you actually write your film script, or write your novel, you are more than half way towards something good happening. So I would say that is my biggest life lesson that has worked. All others have failed me " ~ Woody Allen

Initially, at a very young age,a gag writer and then a musician, humorist, philosopher, playwright, stand-up comic, film star, film writer and film director ~ Woody Allen continues, at the ripe age of 77, to follow that life lesson ~ grinding out a movie a year and continues to surprise us, as Chaplin almost always did, with his observations, artistic talent and always his own unique voice.

But Robert Weide's must see two-part documentary on Woody Allen features unprecedented access to people who not only truly know him but also supported his talent and worked with him ~ as both producers and actors. After delightfully watching both parts ~ I can easily say that Woody Allen is America's Charlie Chaplin and we are blessed to have experienced, in some of our lifetimes, two such driven, troubled and gifted talents.  http://video.pbs.org/video/2163103615/

And finally Woody's passive, unlike Chaplin's, take on politics ~ " I don’t find politics profound enough to deal with it as an artist. The story of human beings is composed of murder, only the cosmetics and the decorations change: 2001 some fanatics killed Americans, and now the Americans kill Iraqis. And when I was a kid, Nazis murdered Jews. Now, Jews and Palestinians are butchering each other. Politics has been volatile for thousands of years, and meaningless, because everything repeats itself. But, as a citizen I vote, or course."

Humor and laughter are the most undervalued and underrated stress relievers in our convoluted times and in the tradition of Charlie Chaplin ~ Woody Allen has become a master practitioner of that art.

Allen L Roland is a practicing psychotherapist, author and lecturer who also shares a daily political and social commentary on his weblog and website
www.allenroland.com He also guest hosts a monthly national radio show TRUTHTALK on www.conscioustalk.net
Posted by Allen L Roland, Ph.D at 12:52 PM