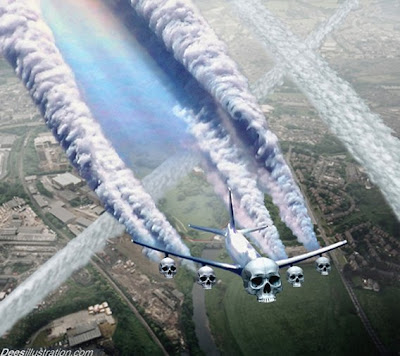 Connect the dots; the constant aerial aerosol bombardment of Chemtrails, the continued fluoridation of our water and acceptance of Genetically Modified Foods has pacified Americans to the extent that they willingly submit to the dictates of the corporate state, to the disintegration of their liberties and to the inevitability of a New World Corporate Order where the only choice is the sedating blue pill of public apathy: Allen L Roland

The numbing out of America through the air we breathe, the water we drink and the food we eat can only be clearly seen when we seek the red pill of the truth and let go of our addiction to the sedating blue pill of apathy and unquestioned conformity.

In other words, It’s taking the blue pill of eternal unquestioned government allegiance or bondage and submitting to authority versus the red pill of critical thinking, individuality and searching for the truth. Morpheus explains it all to Neo in the Matrix ~ "Neo, Like everyone else, you were born into bondage, born inside a prison that you cannot smell, taste, or touch. A prison for your mind. Unfortunately, no one can be told what the Matrix is. You have to see it for yourself. " The Matrix (1999) Four minute video http://www.youtube.com/watch?v=te6qG4yn-Ps

Let’s review all three of these and their global consequences;

The other day I saw an incredible number of these 'persistent jet contrails' in the sky above the city in which I live, but at timesI have been physically effected by them in terms of noticeable throat and lung congestion.

Chemtrails, once considered a 'conspiracy theory', are now admitted by the U.S. government to be a very real geoengineering program.

The problem? Chemicals with known health effects are being sprayed above our heads on a daily basis and without out any real understanding of their purpose or potential long term health effects ~ and in particular, respiratory effects.

Please watch this video and read the accompanying article for a better understanding of the government's open secret geoengineering program...

Dan Bidondi (The truth Warrior) writes “ I myself am a Pilot for over 10 years and have worked in the aviation field for about the same amount of years; from a professional point of view, I can say that there is a huge difference between condensation (con-trail) and a chemical trail (chemtrail). A condensation trail dissipates as the jet moves along, a chemical trail will stay and expand into man-made clouds used for various weather experiments loaded with toxic chemicals that we breathe in on a daily basis … Chemicals include: Arsenic, Aerosol, Barium, Depleted Uranium, high levels of Mercury, Aluminum, and several other toxic chemicals. They are a huge cause in most respiratory breathing problems in America. I did a beta test on how many cases of an ambulance being called within a 8-hour period from respiratory problems, people of all ages infant to elderly that can’t breathe. I worked in a facility in Springfield, MA where I monitored operations and we had a Police-Fire scanner. I monitored an average of 8-13 calls every day within that 8-hour period of people who could not breathe.”

Bidondi rightfully concludes ~ “Once these chemicals are sprayed, several hours later they descend towards ground level and the human body inhales these toxic fumes. You may ask if wearing a gas mask is safe ~ well, you may protect your lungs, but also remember that the plants breathe these chemicals in as well, affecting your foods grown and water you drink along with the already added poison Sodium Fluoride and all its derivatives to the water and GMO food crops incorporated by your friends at Monsanto.”

And finally Alex Jones, Infowars.com, reports on November 13, 2011, that NASA reported 5 years ago that the earth is now receiving at least 20% less sunlight than 10 years before.

“After 16 years of denial, the White House Science Czar John P Holdren now admits that they have been “testing” the manipulation of Earth’s atmosphere with Barium salts, Aluminum Dioxide and other toxic compounds.”

Bottom line: there is a world-wide secret program to manipulate the atmosphere. They admit it’s happening, but they won’t tell us why.

One of the reasons I drink clean and filtered bottle water is because the menace of fluoridation. As I become more and more aware of why so many people are blind to the realities of the growing tyranny all around us, I realize... they've been drugged.

Wake up, man! How can you take the Red Pill, if you're swallowing the blue one?

Here’s the stuff they don’t want you to know about fluoridation.

The foods and drugs these corporate scientists lie about affect our immune systems, our reproductive systems, and our overall health.

Basically, they'd feed us poison if the company told them to sell it to us, and that's exactly what they're doing... with the main culprit being Monsanto.

According to the Institute for Responsible Technology:

"The GM soybean and corn varieties used in the feeding trials 'constitute 83 percent of the commercialized GMOs' that are currently consumed by billions of people. While the findings may have serious ramifications for the human population, the authors demonstrate how a multitude of GMO-related health problems could easily pass undetected through the superficial and largely incompetent safety assessments that are used around the world."

"Monsanto is so despised by environmentalists that Google's first suggested search term for the St. Louis company is 'Monsanto evil.' Readers ... voted Monsanto the world's most evil corporation in a January poll, giving the corporation a whopping 51 percent of the vote."

Among all developed countries, Americans are the fattest people in the world. The World Health Organization found over 60% of the American population is obese or overweight. Even more disturbing, the U.S. is the only country in the developed world to label obesity a national security health risk.

Top Pentagon officials have warned Americans are becoming so fat, most of those volunteering for the Army are disqualified because of their size. Child obesity is also on the rise in the U.S. The Centers for Disease Control estimates 1 in every 3 American kids are either obese or overweight. Jeffrey Smith, the author of Seeds of Deception, points to the mass production and consumption of genetically modified foods in the U.S. as the most probable source of this on going problem.

Watch this RT interview where the hypocrisy of both Barack and Michelle Obama are laid bare with the appointment of several key Monsanto people to the Obama administration and FDA.

So there you have it, America is being numbed out through the air we breathe, the water we drink and the food we eat as the Corporate global elite ply their trade at the expense of a sedated and apathetic public.

It can only get worse and here’s a recent example ~

Recently, two million live virus oral vaccine/bait units were dropped by airplane all over the state of Texas ~ to protect animals and humans from rabies. Each package was dipped in fish oil and fish meal crumbles to make the vaccine/bait appealing to animals. ( Yummy ).

The claim is that these packages are 'harmless', however they do contain a LIVE virus. They also add that should you come into contact with one and you have an easily compromised immune system you should contact your physician immediately.

Check out this video for details...

"Our society is run by insane people for insane objectives. I think we're being run by maniacs for maniacal ends and I think I'm liable to be put away as insane for expressing that. That's what's insane about it." - John Lennon

Take the red pill before it’s too late!