HEART IS THE MASTER / MIND THE SERVANT 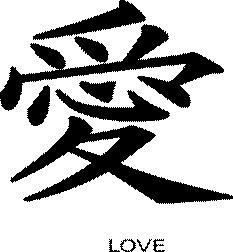 The Japanese symbol of love is a replica of the heart’s dominance ~ for the mind is always looking for answers that the heart already knows. Armed with this innate compass, synchronistic heart felt events and relationships offer clues that our lives are divinely guided ~ whether or not you can fully accept it. Only the ego stands in the way of this great inner wisdom and awareness of not only a universal loving plan but our individual participation in it as a heart grounded warrior: Allen L Roland

There is absolutely no doubt in my mind that my life is divinely guided by my heart and when I fully surrender to love I enter a Unified Field of soul consciousness where there are no accidents and where heart felt synchronistic events and relationships are constant reminders of this universal truth.

By fully surrendering to love many years ago and falling through a rabbit hole to another state of consciousness ~ I found and embraced an innocent child within myself who always wanted to love that deeply and who had an intentioned destiny to fulfill as well as a song to sing.

Every love relationship that has ensued since I opened my heart has led me through fear and to the heart grounded place where I am now ~ living in the blissful awareness that I am part of something far greater than myself and, as such, my heart has become a fragment of life's heart. The great Egyptian poet Mahfouz expressed it beautifully ~ “When the heart achieves its desire, you shall transcend time and space” for we are all, in essence, put on this planet a little time to bear the beams of a love that transcends time and space ~ the Unified Field.

We must eventually all come together to change the world and, in that spirit, here is a 5 minute video of one million children singing Composer Howard McCrary’s Change The World ~ which will touch even the most hardened heart. http://www.youtube.com/watch?v=l4h-R9xDJDk&feature=player_embedded

Thus, by listening and responding to my inner heart call ~ I have not only found direction in my life but have become in sync with my destiny.

R. Adam Crane BCIA Senior Fellow, BCIAEEG, NRNP Diplomate writes in Science of The Heart: The Role of the Heart in Human Performance of the same phenomenon; http://www.mindfitness.com/adam_hrv.htm

" There is now a scientific basis to explain how and why the heart affects mental clarity, creativity, emotional balance and personal effectiveness. Research indicates that the heart is far more than a simple pump. The heart is, in fact, a highly complex, self-organized information processing center with its own functional that communicates with and influences the cranial brain via the nervous system, hormonal system and other pathways. These influences profoundly affect brain function and most of the body's major organs, and ultimately determine the quality of life. "

Note: It is now known that the signals the heart sends the brain can influence perception, emotional processing, and higher cognitive functions.

”Throughout history philosophers have asserted that "when the heart enters the brain wisdom emerges". Now, neurocardiology has demonstrated that there are physiological correlation's for this ancient concept. Furthermore, these discoveries have been translated into a fascinating and enjoyable form of Biofeedback with enormous potential. Part of the reason for this potential is that people are attracted to the simple, common sense notion that there is something that can be done to assure that their thinking will be positively influenced by their hearts. Of course, heart represents one's humanity, compassion, wisdom etc., but most people are keenly aware that feelings in the heart profoundly affects health. "

Note: One of the tenets of modern psychology and learning theory is that what we think determines our reality. "As you think so you are". Since the heart mediates the emotional system, and since thoughts with an "emotional charge" are those thoughts that most influence our life and our reality, it can be suggested that the heart truly is massively influencing the brain and our reality - if not dominating it.

" Biomedical research has revealed that the heart is not just a simple pump, but a highly complex, self-organized information processing center with its own functional "brain." With each beat, the heart continuously communicates with the brain and body via the nervous system, hormonal system, bioelectromagnetic interactions, and other pathways. Scientists are demonstrating that the messages the heart sends the brain not only affect physiological regulation, but can also profoundly influence perception, emotions, behaviors, performance and health. "

Note: The heart produces by far the most powerful rhythmic electromagnetic field in the body. The brain and all the cells in the body are continuously bathed in the heart's electromagnetic field, which can also be detected several feet away from the body by sensitive instruments. The implications are that the heart is an energetic system, and the heart's field is a carrier of emotional information and a mediator of bioelectromagnetic communication both within and outside the body. Many scientists believe that the heart's field changes distinctly as we experience different emotions, and is registered by the brains of people around us.

The heart's field also appears to be capable of affecting cells, water and DNA studied in vitro. The implications of these findings are that people may be capable of affecting their environment in ways not previously understood; and that such "energetic" interactions may be prominently influenced by our emotions. Growing evidence also suggests that energetic interactions involving the heart may underlie intuition and important aspects of human consciousness.

”The term physiological coherence is often used to describe a physiological mode that encompasses entrainment, resonance and synchronization, which are all distinct but related physiological phenomena that are frequently associated with more ordered and harmonious interactions among the body's systems.

Coherence is also used to describe two or more waves (or systems) that are either phase - or frequency-locked. This is also called entrainment. In the coherent mode, respiration, heart rhythms, and blood pressure rhythms become entrained and oscillate at the same frequency. The term cross-coherence is used to specify this type of coherence. "

In terms of physiological functioning, coherence confers a number of benefits to the system. For example, there is increased cardiac output in conjunction with increased efficiency in fluid exchange, filtration, and absorption between the capillaries and tissues; increased ability of the cardiovascular system to adapt to circulatory requirements; and increased temporal synchronization of cells throughout the body. This results in increased system-wide energy efficiency and metabolic energy savings. "

Did you know that this amazing organ, developed in the womb before the brain, this heart that we often times ignore, neglect, and build walls around, is where we can find our greatest strength, our faith, our courage and our compassion, empowering our higher emotional intelligence that can, if we allow it, guide us throughout our lives.

In my work as a psychotherapist my clients achieve mind heart coherence when I get them to take responsibility for love rather than running away from it. I do that by helping them see that the people they may have felt the deepest pain with were quite often people they deeply loved.

When love and gratitude replaces anger and resentment ~ definite physiological changes occur ~ for the heart is now enlisted in the healing process.

I've seen clients literally lose 10 years of age in appearance when they suddenly opened up their closed hearts ~ but the effect on their immune system is even more dramatic. In my on going Healing The Wounded Heart ( Band of Brothers) eight week Workshops with combat veterans with PTSD, the participants have averaged close to a 60 % improvement in all symptoms of PTSD ~ and in particular feelings of joy and gratitude.

In that regard, I treat PTSD ( Post Traumatic Stress Disorder ) as PTHD or Post traumatic Heart Disorder ~ and enlist their opening hearts in their own self healing process.

In my book RADICAL THERAPY / SURRENDER TO LOVE AND HEAL YOURSELF IN SEVEN SESSIONS ( NOT SEVEN YEARS I demonstrate that the seeming separation from love ( psychic Pain ) is not only capable of stunting our emotional growth as well as effecting our will to live but also can be a dramatic co- factor in effecting our immune system ~ eventually resulting in heart disease or abnormal cell growth such as Cancer.

My own childhood paranormal precognitive vision ( of the golden gate bridge, water and houses ) at six years old ~ after my heart closed when I was taken away from my beloved grandfather while I was living in Massachusetts ( and that memory being erased by psychic pain ) ~ and 40 years later, after my heart opened, walking into that same exact scene in San Francisco and realizing I was seeing through the eyes of a child within myself ( who had obviously been in a state of soul consciousness ) is a classic example that this state of soul consciousness not only lies beyond time and space but part of me obviously knew at six years old that this event would eventually happen ~ but only after I got off the ego’s fear based local and surrendered to the heart based express.

In other words, my heart was the master and my mind became its servant when I eventually totally surrendered to love and its inner guidance.

Many are called, few listen and fewer still respond to this inner call of the heart and the culprit is always the ego ~ which was created ( like a cocoon) to protect us from psychic pain and to maintain control.

But that ego was eventually meant to be shed and only love is capable of moving us beyond its suffocating and limiting walls of control and fear ~ particularly fear of our deepest joy, delight and the unknown.

So, in that sense, being out of control is actually being in the Unified Field for only then do we stop striving and truly be ~ realizing that our life is not only being divinely guided but that we have a part to play in a slowly evolving loving plan.

As such, only the Ego's need to control is in the way of this shift in consciousness which is why the next to last step of ego death is surrender ~ and which is why the entire planet is now in the painful process of making this shift of consciousness ~ fueled from within and without by our innate evolutionary need to unite, cooperate and love one another. The final step of ego death is joy and celebration ~ for you are now no longer confined within the restrictive walls of the ego. You are now flying on the wings of a universal urge to unite and in service from a place of love and gratitude ~ as I most certainly am.

Teilhard de Chardin knew and shared this great secret 50 years ago ~ " If there were no real propensity to unite, even at a prodigiously rudimentary level, indeed, in the molecule itself ~ it would be physically impossible for love to appear in the ' hominized ' or human form. "

As such ~ only by fully surrendering to love can we re-establish the heart as the true master and the mind as the servant ~ and in the process become a heart grounded warrior capable of defeating not only fear but the strategies and devices of the ego as we play our part in a constantly evolving loving plan.

So this Valentine day, remember that ‘that loving feeling’ becomes far more profound and enriched when we surrender to our common empowering tap root of conscious unconditional love. See my Seven Stages of Love and Relationship / few get beyond stage six ~

“Your task is not to seek for love, but merely to seek and find all the barriers within yourself that you have built against it.” Rumi