THE CASE AGAINST ATTACKING IRAN 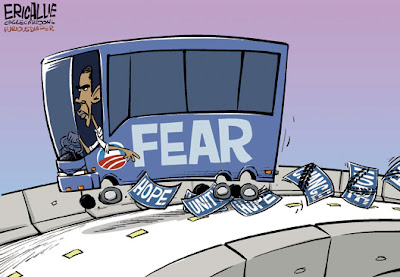 Almost 4 years after President Obama took office, his campaign strategy of Change and Hope we can believe in has shifted to exploiting Fear. He now joins the leading Republican presidential candidates, with the exception of Ron Paul, in demonizing Iran to the extent that war is almost inevitable ~ a war that would benefit only Israel and the military/industrial complex at the further expense of the American tax payer: Allen L Roland

There are no real grounds for war with Iran.

If you're going to argue for war, you had better at least know what you're talking about, especially if you're going to be debating George Galloway. Here is Galloway responding on air to a questioner who uses all the talking points regarding the premise that Iran must be neutralized for the good of the world. ( very similar points that were made regarding invading Iraq ~ which Galloway points out )

George Galloway vs. the warmonger parrot who is very similar to Republican right wing zealots including Presidential contender Rick Santorum who said on NBC television's "Meet the Press" that he would tell Iranian leaders that either they open up those facilities, begin to dismantle them and make them available to inspectors ~ “ or the U.S. would attack them “.

Let’s talk about these recent U.S. sanctions against Iran ~ measures that were obviously supported by war hawk advisors in the White House as well as the powerful Zionist lobby ~ which the Bush/Obama administration continues to cater to. Dr. Ismail Salami, Veterans Today, comments on the U.S. Engineered sanctions and their effect and ultimate meaning ~ “The war of words which ensued between Iranian army commanders and the American military men testifies to the fact that the wall of fear has collapsed before the eyes of the Iranians and that the U.S. is no longer seen as an indomitable enemy.” http://www.veteranstoday.com/2012/01/04/us-engineered-sanctions-no-coup-de-grace-for-iran/

What is the United States and Israel really afraid of, since Iran’s nuclear capability has yet to be proven?

The answer is obvious and it’s the fact that Iran has upgraded its medium range conventionally-armed missiles with GPS technology, making its missiles much more accurate. This means Iran can now target Israel's own nuclear, bio and chemical weapons stockpiles, located inside Israel, as well as the Dimona nuclear reactor.

As Mark H Gaffney correctly writes ~ “I believe the US will exploit the situation to attack Iran's nuclear facilities. But, even more importantly, the US will target Iran's conventional missiles. Indeed, I believe this is the real reason for US sanctions in the first place, and for the buildup of tensions in recent days. Despite public perceptions, and all the rhetoric about nukes, the present crisis has nothing to do with Iran's alleged nuclear weapons program. In my opinion, that is just a cover story. I believe the present crisis has been manufactured to create the pretext for a US air campaign to take out Iran's conventional missile sites. The US will also target Iran's nuclear facilities, but the primary target will be Iran's conventional missiles. The US will be doing Israel's bidding. The Zionist tail will be wagging the servile US dog…

Obviously, you can't generate public support for such a bombing campaign, on Israel's behalf. Hence the cover story about nukes and the alleged Iranian threat to wipe Israel off the map, all of which is untrue but very effective propaganda nonetheless.”

Let’s get something straight about that threat ~ the supposed quote of newly elected Iranian President Mahmoud Ahmadinejad to “Wipe Israel off the Map “ was fabricated by the U.S. media in order to justify an all-out war on Iran ~ a lie that is still being used by Obama and leading Republicans in order to garner support from Israel as well as the Military/Industrial complex.

Here are the facts, according to Arash Norouxi ~ “ In his speech, Ahmadinejad declares that Zionism is the West's apparatus of political oppression against Muslims. He says the "Zionist regime" was imposed on the Islamic world as a strategic bridgehead to ensure domination of the region and its assets. Palestine, he insists, is the frontline of the Islamic world's struggle with American hegemony, and its fate will have repercussions for the entire Middle East…Ahmadinejad acknowledges that the removal of America's powerful grip on the region via the Zionists may seem unimaginable to some, but reminds the audience that, as Khomeini predicted, other seemingly invincible empires have disappeared and now only exist in history books. He then proceeds to list three such regimes that have collapsed, crumbled or vanished, all within the last 30 years:

(1) The Shah of Iran- the U.S. installed monarch

In the first and third examples, Ahmadinejad prefaces their mention with Khomeini's own words foretelling that individual regime's demise. He concludes by referring to Khomeini's unfulfilled wish: "The Imam said this regime occupying Jerusalem must vanish from the page of time. This statement is very wise". This is the passage that has been isolated, twisted and distorted so famously. By measure of comparison, Ahmadinejad would seem to be calling for regime change, not war.”

This is blatant Manipulation through fear as Arash Norouxi definitively points out in Global Research ~ “ What has just been demonstrated is irrefutable proof of media manipulation and propaganda in action. The AP deliberately alters an IRNA quote to sound more threatening. The Israeli media not only repeats the fake quote but also steals the original authors' words. The unsuspecting public reads this, forms an opinion and supports unnecessary wars of aggression, presented as self defense, based on the misinformation. This scenario mirrors the kind of false claims that led to the illegal U.S. invasion of Iraq, a war now widely viewed as a catastrophic mistake. And yet the Bush administration and the compliant corporate media continued to marinate in propaganda and speculation about attacking Iraq's much larger and more formidable neighbor, Iran. Most of this rests on the unproven assumption that Iran is building nuclear weapons, and the lie that Iran has vowed to physically destroy Israel. Given its scope and potentially disastrous outcome, all this amounts to what is arguably the rumor of the century.”

Manipulation through fear ~ the ongoing mantra of the Bush/Obama administrations and most certainly the fuel that drives the Military/Industrial complex in its quest for unending war for perpetual financial profits.

The late George Carlin nailed it when he said War to many Americans and most certainly our political leaders is a macho game and they’re still playing it ~ with the exception of Ron Paul. See 7 minute video but beware ~ this is George Carlin at his x rated best. http://www.youtube.com/watch?v=UaS2bRGS86c

As Paul Craig Roberts writes in his Outlook for The New Year ~ “The concepts that the Bush/Obama regimes have institutionalized are totally foreign to the Anglo-American concepts of law and liberty. In one decade the US has been transformed from a free society into a police state. The American population, to the extent it is aware of what has occurred, has simply accepted the revolution from the top.

Ron Paul is the only American seeking the presidency who opposes the tyranny that has been institutionalized, and he is not leading in the polls.

This tells us all we need to know about the value Americans place on liberty. Americans seem to welcome the era of tyranny into which they are now entering.” Read full article : http://www.paulcraigroberts.org/2011/12/31/the-outlook-for-the-new-year/

80 years ago, Germany, steeped in a depression, also seemed to welcome the era of tyranny they entered into when they gave up their liberties and rights and allowed themselves to be controlled by institutionalized fear ~ and in the process became a police state while ravaging the world with their imperialistic agenda.

"As nightfall does not come all at once ~ neither does oppression. In both instances there is a twilight when everything remains seemingly unchanged. And it is in such twilight that we all must be most aware of change in the air - however slight - lest we become unwitting victims of the darkness." Supreme Court Justice William O. Douglas

The twilight in America is rapidly fading into darkness and is fully revealed in the fear mongering of Iran by the Bush/Obama administration’s continuing effort to exploit fear for our own imperialistic purposes. In summary, there is no case for attacking Iran and the American people must make this case now ~ before it’s too late.