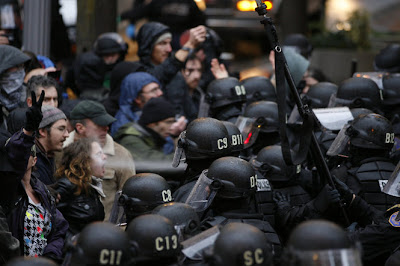 The global elite see themselves as the deciders and a militarized fascist police force protecting their interests but never underestimate the power of the people, armed with the truth, demanding the change that was never delivered and willing to shut down the machinery of government in the process: Allen L Roland

The more the Occupy Wall Street movement grows , the more apparent becomes the police state that has emerged from the Patriot Act ~ and the more obvious becomes the real reason for its formation ~ to protect the global elite from the people armed with the truth.

As Steve Bhaerman writes ~“ For the past ten years since the oxymoronically-titled "Patriot Act" was passed, we've been seeing "soft fascism," the kind that quietly installs the machinery of the police state just in case our collective awareness breaks through the carefully-crafted illusion of freedom. It is a disease process that has been robbing us of our heart, our soul, and our spirit - until now.”

Soft fascism would become true fascism when civil protestors are arrested, interned and sent to the scores of FEMA camps ~ that were originally built to detain illegal immigrants but were eventually meant for civil dissidents and enemies of the state. This would coincide with shutting down the internet which is the main catalyst and provider of information for the OWS movement. See HR 645 report ~

Once a person is arrested and interned in a FEMA camp located on a military base, that person would in all likelihood, under a national emergency, fall under the de facto jurisdiction of the Military: civilian justice and law enforcement including habeas corpus would no longer apply.

This photo of a defiant young woman being blatantly pepper sprayed by a heavily armed police squad says it all ~ WE REPRESENT THE DECIDERS AND YOU WILL BEND TO OUR WILL!

Think of the OWS movement as essentially a demand for truth and transparency ~ without which no true change can occur.

Arthur Schopenhauer identified the three stages the truth must pass through before it is acknowledged as being self-evident and we can most certainly apply those to the Occupy Wall Street movement;

1. It is ridiculed; As the OWS movement was initially mocked by the corporate owned main stream press.

2. It is violently opposed; Once its presence has been established or acknowledged it is violently opposed by the police state ~ which increasingly sees and reacts to the occupiers as terrorists. This is when the real revolution begins because the people begin to see and experience the soft fascism that has permeated the state and slowly eroded their freedom and liberty ~ and all in the name of the War on Terror. See video of police brutality http://therealnews.com/t2/component/seyret/?task=videodirectlink&id=11398

Please note that a well-known DC lobbying firm with links to the financial industry has proposed an $850,000 plan to take on Occupy Wall Street and politicians who might express sympathy for the protests, according to a memo obtained by the MSNBC program 'Up w/ Chris Hayes.' The memo proposes to pay the firm to conduct 'opposition research' on Occupy Wall Street in order to construct 'negative narratives' about the protests and allied politicians.

This is the stage where the revolution really begins for the people fully realize that the real aim of the Patriot Act was not to protect Americans from foreign terrorists but instead to protect the financial elite from the people armed with the truth ~ starting with the 9/11 cover up.

I am not just a Consumer. I am a Citizen.

I will no longer be labeled Left or Right, Liberal or Conservative, Demopublican or Republocrat.

I will no longer follow Puppets labeled Left or Right, Liberal or Conservative, Demopublican or Republocrat.

I am the People. And I am coming for the Puppet masters.

I am part of the 99 Percent. And I demand the following:

Or, if these demands are not addressed promptly: Regime Change.

This leads eventually to stage three ~ where the demands of the OWS movement are accepted as self evident, become political demands and true change occurs. This will not happen painlessly as most certainly was the case in our original American revolution 235 years ago. This is bottom up change whereas;

Top down change is fueled by a selfish corporate state whose primary focus is profit and eventually leads to greed, deception and corporate fascism.

Bottom up change is fueled by an empowered people whose primary demand is truth, fairness and justice which will eventually lead to social cooperation, altruism and true democracy.

The tables have essentially turned ~ for the OWS movement is spreading like wildfire and Regime Change is inevitable for nothing can stop an outraged citizenry, armed with the truth, and prepared to stop the machinery of a morally failed and corrupt government system in the process.

Bill Moyers agrees that Democracy only works when we claim it as our own as he slams the rule by the Plutocracy or 1% in this three minute video ~ http://www.nationofchange.org/must-see-video-bill-moyers-slams-rule-1-plutocracy-and-democracy-don-t-mix-1321809065