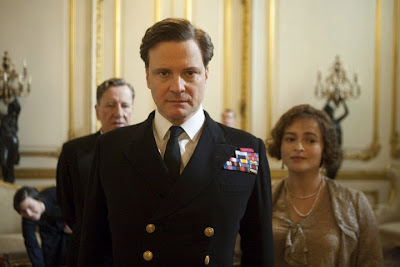 The King’s Speech is Oscar bound with incredible performances by Colin Firth as King George VI along with Geoffrey Rush and Helena Bonham Carter, as the queen mother. This is movie making at its best and Director Tom Hooper weaves this historic event of a King and his speech therapist into a flawlessly acted work of art: Allen L Roland

The King’s Speech has special meaning to me since I was a very young child living in Newtonville, Massachusetts with my beloved Grandfather, Joseph Allen Bryant, when King George VI made his historic speech to the British people and the world as Great Britain declared war on Nazi Germany.

I remember listening to the BBC radio broadcast of that very same speech with my grandfather and sensing that the world was changing very rapidly although I had no idea as to the true extent of the coming change.

Director tom Hooper has indelibly captured the extent of that change and its effect on the stammering Prince Albert who suddenly finds himself heir apparent with the death of his father King George V and the abdication of his older brother King Edward VIII for the love of his American divorcee, Wallis Simpson ~ all handled with delightful detail.

As a psychotherapist, I really identified with the speech therapist Lionel Logue, brilliantly played by Geoffrey Rush, who uses many unorthodox methods to loosen up a reluctant Albert, including swearing and singing, but in the end accomplished the impossible by becoming what Albert really needed ~ a fearless coach who would tell him the truth with love and compassion and eventually become a trusted and needed friend who totally believed in him.

The essence of this movie is the extraordinary friendship that develops between these two men which not only validates Logue’s work but inspires Albert to speak with force and confidence as the King of England.

Here’s the trailer ~ which barely touches the treasure within.

Don’t miss it ~ it’s got Oscar written all over it.