The Prince Of Peace In His Bomber Jacket

THE PRINCE OF PEACE IN HIS BOMBER JACKET 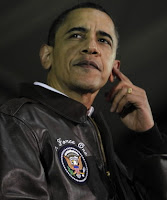 The prince of peace, Barack Obama poses in occupied Afghanistan for his obligatory warrior photo ~ dressed in his bomber jacket which fully reveals the hypocrisy of his recent and deeply tainted Nobel Peace prize : Allen L Roland

As Holy Week unfolds in 2010 ~ we have the twin spectacles of the Vicar of Christ, Pope Benedict XVI, deservedly under attack for obstruction of justice while the Prince of Peace, Nobel Peace prize winner President Barack Obama, visiting illegally occupied Afghanistan in the dead of night for an on the run Photo Op with the troops ~ while posing in his macho bomber jacket. In essence, it was a six hour pro-war pep rally !

All we need is a Mission Accomplished Banner behind Obama to replicate the hypocrisy of the GW Bush Photo Op on May 1, 2003 on the aircraft carrier USS Abraham Lincoln where Bush declared that the Iraq war, which was also an illegal occupation, was over.

This Obama photo is a statement to America, and the world, that Obama is a war president and you better get used to it. Obama sold out to the Military / Industrial complex a long time ago ~ and, as a result, we'll be in Afghanistan for many years to come.

Those were Obama's exact words by the way ~ He assured his listeners, and most assuredly Americans at home, that we will “finish the job” and made another promise as well: “I’m looking forward,” he told the troops, “to returning to Afghanistan many times in the years to come.”

Machiavelli, The Prince, ch. IX, fully describes our current Prince Obama ~ " For in every city these two opposite parties [people vs aristocracy] are to be found, arising from the desire of the populace to avoid oppression of the great, and the desire of the great to command and oppress the people....For when the nobility see that they are unable to resist the people, they unite in exalting one of their number and creating him prince, so as to be able to carry out their own designs under the shadow of his authority."

As Norman Soloman writes in Common Dreams " President Obama has taken a further plunge into the kind of war abyss that consumed predecessors named Johnson, Nixon and Bush. "

The Afghanistan and Iraq wars ($1 trillion so far), will cost $200-250 billion more this year, including hidden and indirect expenses. Obama’s Afghan “surge” of 30,000 new troops will cost an additional $33 billion ~ which is more than Germany’s total defense budget.

Commander in Chief Obama is paying for America’s wars through supplemental authorizations ­by utilizing America's maxed-out credit card. Future generations will be stuck with this bill to the tune of what is now over $30,000 dollars per American.

In other words, If Americans actually had to pay for these wars and occupations through a war tax ~ and not on credit ~ both of these conflicts would now be over.

As Daniel Ellsberg said ~ "The only way the Vietnam War could have been ended was by Congress cutting off the money " and he was absolutely correct !

President Obama now has HIS war in Afghanistan and his Bomber Jacket ~ but we can stop this War President nonsense by defunding these senseless occupations and make it our peace cry for the midterm elections in November, 2010.