GIVE 'EM HELL, BERNIE / THE GAME IS ON 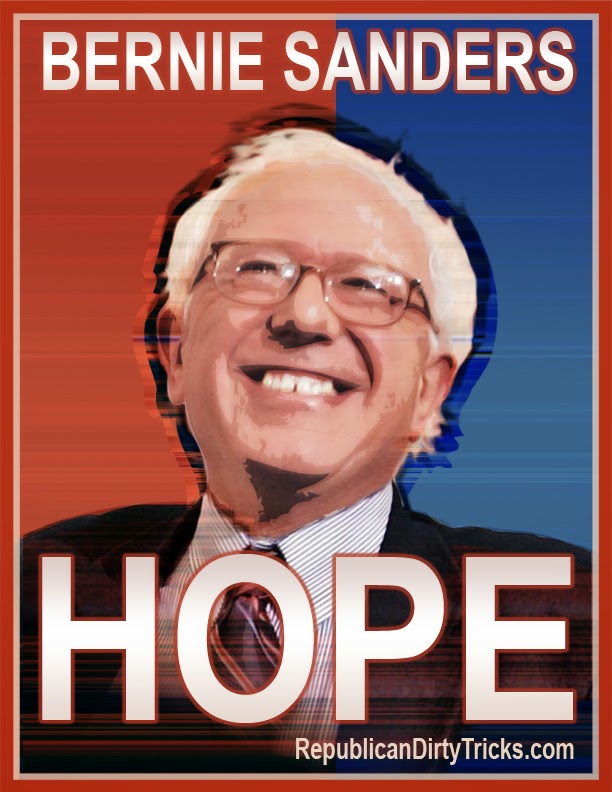 Admit it, most of us know the political system is rigged, that most Americans have been marginalized and silenced by a growing plutocracy and that corporations are now firmly in control, that a truly honest politician is an oxymoron, that is until now ~ Bernie Sanders is a lifeboat in a sea of political deception and lost hope. Bernie is an honest Independent politician who cares enough now in 2015 to become a Democrat, run against Hillary and the other political pretenders of both parties for the presidency and who knows ~ A Sanders/Warren ticket just may ride a building progressive wave of Hope from 2008 that is still waiting to crest: Allen L Roland, Ph.D

“...legitimacy is based on three things. First of all, the people who are asked to obey authority have to feel like they have a voice ~ that if they speak up, they will be heard. Second, the law has to be predictable. There has to be a reasonable expectation that the rules tomorrow are going to be roughly the same as the rules today. And third, the authority has to be fair. It can't treat one group differently from another.”  ~ Malcolm Gladwell, David and Goliath: Underdogs, Misfits, and the Art of Battling Giants

The Bureau of Economic Analysis has reported recently that 6 years of zero rates and Large-Scale Asset Purchases (LSAP) under the Obama administration ~ which have enriched stock speculators, inflated the largest asset-price bubble in history, and exacerbated inequality to levels not seen since the Gilded Age ~ have done nothing to improve the real economy, boost demand or reduce unemployment. As the BEA data illustrates, the US economy is basically DOA ~ a victim of criminal congressional negligence and Central Bank chicanery as reported by Mike Whitney on ICH.  See article ~
http://www.informationclearinghouse.info/article41727.htm

If you're not outraged by this, you're on life support so I wonder how many Americans now feel what I feel today ~ I'm ready for real change, I'm ready for the honesty of Bernie Sanders ~ I can't wait to see Bernie debate Hillary Clinton as to where Americans really are, are they really being treated fairly in our present system and are our voices being heard and represented  in our present plutocracy.

U.S Senator Bernie Sanders of Vermont declared his candidacy yesterday for president of the United States. The senator sent an email to hundreds of thousands of supporters declaring his intention to run in the Democratic Party and laying out themes of his campaign:


“I am writing to inform you that I will be a candidate for President of the United States. I ask for your support.


“For many months I have been traveling from coast to coast across our country, and have had the opportunity to meet with thousands of good, hard-working, and remarkable people. Like you and me, they are deeply concerned about the future of our country.


“They wonder why they are working longer hours for lower wages. They worry about whether their kids will be able to afford college or get decent jobs. They fear that they may not have the savings to retire with dignity and security.


“The challenges facing our country are enormous.


“It's not just that, for forty years, the middle class has been disappearing. It's that 99% of all new income is going to the top 1%, and the grotesque level of wealth and income inequality today is worse than at any time since the late 1920s. The people at the top are grabbing all the new wealth and income for themselves, and the rest of America is being squeezed and left behind.


“The disastrous decisions of the Supreme Court in the Citizens United case and in other related cases are undermining the very foundations of American democracy, as billionaires rig the system by using their Super PACS to buy politicians and elections.


“And the peril of global climate change, with catastrophic consequences, is the central challenge of our time and our planet.


“The middle class in America is at a tipping point. It will not last another generation if we don’t boldly change course now.


“After a year of travel, discussion and dialogue, I have decided to be a candidate for the Democratic nomination for president. But let's be clear. This campaign is not about Bernie Sanders. It about a grassroots movement of Americans standing up and saying: ‘Enough is enough. This country and our government belong to all of us, not just a handful of billionaires.’”

USA Today writes: “It also will be the first time that the fiercely independent politician has run as a Democrat. He has long criticized both parties for being too beholden to corporate interests. He does not accept campaign contributions from corporate political action committees.”

And Mark Karlin, Buzz flash at Truth out, correctly writes;
"Sanders will run a social and economic justice candidacy at a timely moment. A growing movement has developed in the US that no longer believes in incremental change. The killings of black males by police - and the protests and uprisings that have risen up – has opened up the debate of the cancer of racism, criminal legal system injustices, economic inequality and political campaign funding.Sanders has long advanced these issues, particularly economic injustice. In 2010, he filibustered a budget agreement between congressional Republicans and President Obama. His indictment was so detailed and devastating that it was published as a book: The Speech: A Historic Filibuster on Corporate Greed and the Decline of Our Middle Class."  See article:http://www.truth-out.org/buzzflash/commentary/bernie-sanders-will-break-the-restricted-platitudinous-frame-of-presidential-rate


Here's a 25 minute YouTube video of the vintage Bernie speaking from the Senate floor ~ explaining why the American people are angry and saying Enough is Enough and why he is willing to speak for them ~ See video https://www.youtube.com/watch?v=8Y-u0UnKZ_U


As Mother Jones explains ~ This is not show business and unlike Hillary Clinton, his rival for the Democratic presidential nomination ~ Bernie Sanders didn't use a splashy, big-budget video to announce his campaign. Instead, the Vermont senator opted for a series of one-on-one television interviews Wednesday followed by a low-key launch event outside the US Capitol Thursday morning. "I believe that in a democracy, what elections are about are serious debates over serious issues," he said Thursday. "Not political gossip, not making campaigns into soap operas. This is not the Red Sox vs. the Yankees, this is the debate over major issues facing the American people."


Bernie has my support and you may call me a dreamer but as John Lennon once sang ~ I'm not the only one ~ and my dream team ticket is a Sanders/Warren ticket for President riding a populist wave to victory in 2016.

In some ways, it's David versus Goliath but never underestimate the power of honesty and the truth ~ it can change the world. Yesterday Bernie told a reporter “I think people should be a little bit careful underestimating me,” and, as a fellow truth teller ~ I most certainly am not making that mistake with Bernie Sanders.


“Never be afraid to raise your voice for honesty and truth and compassion against injustice and lying and greed. If people all over the world...would do this, it would change the earth.”  ~ William Faulkner

Heart centered spiritual consultant and advisor Allen L Roland can be contacted at  allen@allenroland.com Allen is also a lecturer and writer who shares a weekly political and social commentary on his web log and website allenroland.com. He is also a featured columnist on Veterans Today and  guest hosts a monthly national radio show TRUTHTALK on www.conscioustalk.net