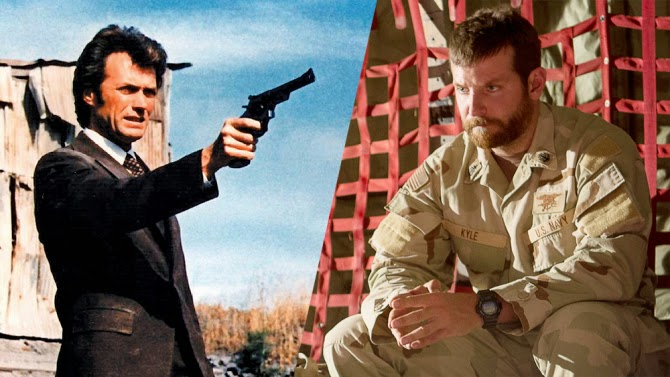 Clint Eastwood's lonely vigilante of Dirty Harry days lives in American Sniper but now the killings have taken a toll and he has Post Traumatic Stress ~ which virtually all combat veterans have to some degree. The VA has been reluctant to tackle soul damage from veterans participating in military combat but my own extensive experience as a heart centered counselor and consultant with combat veterans with PTSD as well as recent studies have conclusively shown that it is a significant risk factor in the rising military suicide rate and it most certainly cannot be eliminated with drugs: Allen L Roland, Ph.D

I saw Clint Eastwood's American Sniper yesterday and I saw Dirty Harry in Khaki (Bradley Cooper) who by dehumanizing the enemy and eliminating them one by one as America's most lethal sniper eventually became dehumanized himself, was diagnosed with PTSD, and ironically eventually was killed at home on a firing range by a troubled fellow serviceman with PTSD ~ who he was teaching how to shoot.

The subtle signs were all there in Eastwood's film that Iraq was an unjust war at the cost of approximately 5000 American lives and close to 500 thousand Iraqi lives as well as millions of displaced civilians; His departing fellow soldier and younger brother telling him as he arrived in Iraq on his fourth tour "This is Fucked"  ~ His therapist having him visit a VA hospital to experience the walking and permanently wounded ~ but he was still in denial and convinced himself he was a hero who saved lives and that eventually cost him his own.

The movie deserves an Oscar as much as Hurt Locker in 2010 and in many ways was more powerful than Hurt Locker. Bradley Cooper captured the inner torture of killing others, even the so called enemy, as well as the obvious growing onset of PTSD with each of his four tours of duty. Cooper deserves an Oscar for his deeply moving performance where his combat company became more important than his immediate family in that he was almost fatally consumed in the adrenaline rush of combat before he finally realized he was ready to come home.  Sienna Miller co-starred as Kyle's wife, Taya and fully captured the anguish of living with someone you deeply love as they begin to slip into the grey zone of PTSD ~ where they are seemingly no longer there.

In an interview, Navy Seal author Chris Kyle admitted that he needed to dehumanize his victims in order to kill them, calling them “savages” ~ but in the process he lost his soul and his humanity.

Is there a better way, besides drugs, to treat PTSD in our returning soldiers?

The answer is yes, according to myself as well as Saybrook University Psychology Professor Dr. Stanley Krippner.  Krippner is the author of two major recent books in the field:  "Haunted by Combat:  Understanding PTSD in War Veterans" and the "Post-Traumatic Stress Disorder" series in the "Biographies of Disease" series, among many other books.


Krippner was also mentor for my Master's Thesis in 1975 ”Conscious Love, The Ultimate Energy" and second reader for my PhD dissertation in 1998 the Unified Field which identifies and demonstrates a psychic energy field of love that exists not only beyond time and space but also deepest within each one of us. Stanley eventually wrote the forward for my book "Radical Therapy, Surrender To Love and heal Yourself in Seven Sessions (Not Seven Years)" which is used as a guide in my highly successful ongoing Healing the Wounded Heart workshops in Northern California ~ where I act as a volunteer consultant, advisor and mentor for these transformation sessions.

Krippner says, that “American Sniper” can usefully be seen as an anti-war movie.  What it doesn’t have is any of the clear instances of how to help someone like Chris Kyle that we know how to do ~ but that the military health system is unfortunately slow to adopt.

Saybrook University has a strong history of research supporting veterans with PTSD.  Graduate Bart Billings, a colonel in the military, helped organize the world’s longest running conference on combat stress, and has testified before congress on the military’s overuse of anti-depressants to treat mental health issues. Drugs are not the answer but are far too often seen as the answer as Colonel Billings, a Clinical Psychologist with a 34 year military career as a Clinical Psychologist, explains ~ 8 minute video https://www.youtube.com/watch?v=F02HElsg8uI


A current Saybrook PhD Student, Jason Frye, is currently conducting research on the psychological impacts of being a sniper. In a recent study, he interviewed two demographically similar men who had received sniper training ~ one of whom had confirmed kills in the field, one of whom had never taken a life.

The sniper who had killed in the field showed significant scores for PTSD, meeting 9 of the 13 criteria for diagnosis, and showing “significant numbers in major depression with suicidality, Post-Traumatic Stress Disorder,” and numerous other issues.

An American soldier dies every day and a half, on average, in Iraq or Afghanistan while Veterans kill themselves at the rate of one every 80 minutes. More than 6,500 veteran suicides are logged every year ~ more than the total number of soldiers killed in Afghanistan and Iraq combined since those wars and occupations began.


A bag filled with violence inducing psychotropic drugs are not the answer for treating our returning veterans, such as Chris Kyle, especially since for every US soldier killed last year, 25 veterans commit suicide. The US military has lost more troops to suicide than to combat for the second year in a row and a better cause versus symptom based understanding of combat-related risk factors for suicide is now critical.


A recent study published in the Public Library of Science online journal (PloS One @ www.plosone.org) by the Institute for Safe Medication Practices (ISMP @ www.ismp.org) listed the top 31 prescription drugs that can cause violent or aggressive behavior in those consuming them. Note that Prozac, Paxil and the amphetamine drugs as well as Lariam are # 2, # 3 # 4 and #5 on the top-ten list: See article ~ http://www.veteranstoday.com/2012/04/25/rising-vets-suicides-heart-centered-approach-needed/

In an important April 13, 2012 research study abstract entitled ~ KILLING IN COMBAT MAY BE INDEPENDENTLY ASSOCIATED WITH SUICIDAL IDEATION ~ the SFVA released the following abstract which indicates the possibility of soul damage with combat veterans who by dehumanizing the enemy and killing them ~ become more dehumanized and suicide prone:

The United States military has lost more troops to suicide than to combat for the second year in a row and better understanding combat-related risk factors for suicide is critical. We examined the association of killing and suicide among war veterans after accounting for PTSD, depression, and substance use disorders.

We utilized a cross-sectional, retrospective, nationally representative sample of Vietnam veterans from the National Vietnam Veterans Readjustment Study (NVVRS). In order to perform a more in depth analysis, we utilized a subsample of these data, the NVVRS Clinical Interview Sample (CIS), which is representative of 1.3 million veterans who were eligible for the clinical interview by virtue of living in proximity to an interview site, located within 28 standard metropolitan regions throughout the United States.


Killing experiences are not routinely examined when assessing suicide risk. Our findings have important implications for conducting suicide risk assessments in veterans of war. See Report:
These findings offer even more justification for offering soul centered workshops for combat veterans as well as other heart centered therapy. We’re talking about soul damage here and only a heart centered intervention can effectively treat  that psychic despondency ~ as I have consistently demonstrated with combat veterans, over the past five years, who have virtually all participated in killing experiences.

And therein lies my point ~ there are most definitely effective and proven ways to handle PTSD other than throwing a bagful of drugs at them and one of them is the heart centered Healing The Wounded Heart workshops we are facilitating with Veterans with PTSD in Northern California.

I have long felt and have now proved that PTSD is really Post Traumatic Heart Disorder for a common symptom of Post-Traumatic Stress Disorder is the inability to give or receive love ~ which can obviously apply to non-veterans who have also suffered significant loss or emotional childhood and/or adult pain.
I have also clearly demonstrated that only after the soul is activated through gratefulness can true self-healing occur for only then does the client (veterans or otherwise) truly want to heal.  Using the premise that what is deepest within us is love (not anger) and utilizing an action oriented approach to face and go through their heart felt fears ~ these veterans, soon discover that beneath their pain, anger and shame is not only love and joy but most importantly their true authentic self.
The purpose then of the Healing the Wounded Heart Workshops i  is to penetrate the grey zone of guilt, aloneness and unworthiness, that many combat War Veterans diagnosed with Post-traumatic Stress Disorder (PTSD) experience, and this is accomplished within a supportive group setting through heart centered self-exploration, group sharing, guided visualization and action oriented homework ~ where love, gratefulness and joy eventually overcome inner fear, anguish and separation.
We call each one of these 6 week (once a week) workshops Band  of Brothers and 14 of them have already been completed since early 2010 and Band of Brothers #15 will commence later this month.
Using Band of Brothers #5 as an example ~ 21 PTSD symptoms were included on the evaluation survey and the veterans were asked to rate their level on the 1-10 scale ( with 1 being “ Very Poor “ and 10 being “ No Problem” for each of the PTSD conditions Before and After the workshop. Here are the after workshop results ~ with an average symptom improvement of 59%.

Three years ago General Peter Chiarelli,  the Army’s No. 2 officer, acknowledged there are more effective ways to treat PTSD than just drugs ~ a fact that we have have been proving for over five years with our heart centered Healing The Wounded Heart workshops for combat veterans with PTSD in Northern California.
“There’s no doubt that we’ve changed. We’ve totally done a 180. But have we done enough? No. I want to do more, quicker. I want to have more of these secrets unlocked faster. I want to understand what drugs we should use to treat these symptoms, if we should use any drugs at all. I want to look into alternative pain management. We are finding there are other ways to handle pain that are more effective and allow a person to feel a lot better than throwing a bagful of drugs at them.” General Peter Chiarelli
“If having a soul means being able to feel love and loyalty and gratitude, then animals are better off than a lot of humans” ~ James Herriot, All Creatures Great and Small


Heart centered spiritual consultant and advisor Allen L Roland can be contacted at  allen@allenroland.com Allen is also a lecturer and writer who shares a weekly political and social commentary on his web log and website allenroland.com. He is also a featured columnist on Veterans Today and  guest hosts a monthly national radio show TRUTHTALK on www.conscioustalk.net