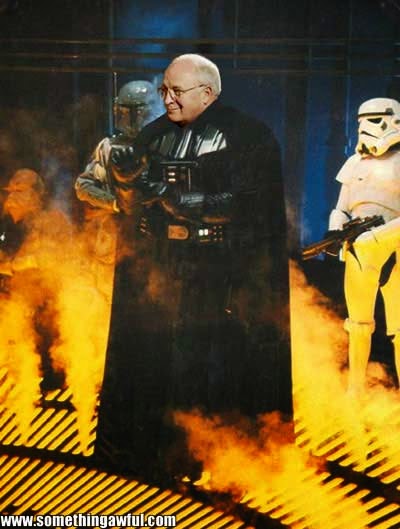 In the fictional Star Wars trilogy, Darth Vader was depicted as a ruthless cyborg who served the dark Galactic Empire whereas in real life Dick Cheney is a ruthless human cyborg, fueled by a transplanted heart, whose self-professed travels to the dark side served and greatly influenced a darkening and morally corrupt American Empire. It is Cheney who enthusiastically introduced torture as a means to obtain confessions to 9/11 in order to both avoid responsibility for his own actions regarding the planning and implementation of America's greatest act of treason ~ as well as seemingly justify our resultant illegal invasion and occupation of Iraq: Allen L Roland, Ph.D


"We can easily forgive a child who is afraid of the dark. The real tragedy of life is when men are afraid of the light." - Plato


“I was a big supporter of waterboarding,” Cheney told ABC’s Jonathan Karl in 2010 in response to a question about battles won and lost within Bush administration’s second term. “I was a big supporter of the enhanced interrogation techniques that…” “And you opposed the administration’s actions of doing away with waterboarding?” Karl asked. “Yes,” Cheney replied.


Let's connect all the telltale dots regarding Dick Cheney's actions:


First some important background and rationale ~ Here’s the 11 minute YouTube must see documentary of the Cheney, Bush and the PNAC Criminal Conspiracy to invade Iraq which obviously was preceded by the PNAC announced need for a new Pearl Harbor ~ which lo and behold became 9/11 within a year and the now infamous and thoroughly discredited official 9/11 story. See Video ~ https://www.youtube.com/watch?feature=player_embedded&v=egqqCYSfV2k


Indeed, Pulitzer prize-winning journalist Ron Suskind reports that the White House (Cheney) ordered the CIA to forge and backdate a document falsely linking Iraq with Muslim terrorists and 9/11 … and that the CIA complied with those instructions and in fact created the forgery, which was then used to justify war against Iraq.


Next Timothy Egan wrote a revealing op-ed piece in the New York Times this week entitled The War Hero and the Chicken Hawk  where Egan shares that choices regarding responsibility that McCain and Cheney made when they were young shaped what they said this week about an awful breach in American values regarding torture:


Excerpt: " In and out of colleges, he (Cheney) dodged the war with five draft deferments; he said he “had other priorities in the ’60s than military service.” Early on, he learned how easy it was to evade responsibility…. Cheney has long backed torture, blithely supporting techniques that were called war crimes when used by Imperial Japan or Nazi Germany, and outlawed in treaties signed by most civilized nations. His central claim ~ not supported by a phone-book-thick body of evidence ~ is that torturing terrorists produced “phenomenal results,” including “the intelligence that allowed us to get Osama bin Laden.” Without having read the Senate Intelligence Committee report, he was quick to say on Monday that the barbarism committed in our name was “absolutely, totally justified.” And of course, he would do it all again, without hesitation….. By Wednesday, he was the petulant child caught and cornered. Confronted with evidence that 26 detainees were wrongfully held, with examples of “rectal feeding” (rape by another definition), or induced hypothermia that most likely killed one suspect, he proclaimed the exhaustive inquiry “full of crap” and he still had not read the report. See Egan article ~ http://www.nytimes.com/2014/12/12/opinion/the-war-hero-and-the-chicken-hawk.html?emc=eta1

And now the obvious rationale for Cheney's denial ~ It became imperative after 9/11 that Cheney cover up his incriminating fingerprints regarding that treasonous act (inspired by PNAC's need for a new Pearl Harbor) and rapidly find a scapegoat or so called mastermind, isolate them or ship them off to Guantanamo, torture and force them to falsely confess and quickly establish a 9/11 link with Iraq.


Here are excerpts from PBS documentary "The Dark Side" about Dick Cheney consciously lying about Iraq and its connection with 9-11 / You tube 2007 Video / 3 minutes https://www.youtube.com/watch?v=QDnu8WOcZBM


Why would Cheney consciously lie unless he was covering up the greater and more perilous big lie of 9/11?


Perhaps only satire can fully reveal the true extent of the Big Lie and how literally half of Washington, DC has been silenced or blackmailed by AIPAC into remaining silent over the fact that 9/11 was an inside job. The only way to stop the current military escalation follies throughout the Middle East is to finally fully reveal the 9/11 Lie they were all initially born from ~ a fact that Cheney is firmly committed to avoid at all costs including justifying inhumane torture in order to, once again, avoid responsibility.

Excerpt: " Actually, Paul Krugman got it half right in 2009 when he wrote ~ ”Let’s say this slowly: the Bush administration wanted to use 9/11 as a pretext to invade Iraq, even though Iraq had nothing to do with 9/11. So it tortured people to make them confess to the nonexistent link. There’s a word for this: it’s evil.”  See his column ~
The secret deeper intent, that Krugman missed or more likely ignored, was that we demonized and attacked Iraq to distract the American public and cover our tracks regarding our high level involvement in 9/11 ~ that’s why George W can’t sleep at night and why I still keep talking tough and waving the flag ~ Take my warning seriously, Barack ~ too much is at stake here and we are not only watching you but we are ready to take any action necessary to maintain this charade.
Patriotism is our last refuge as it is for all scoundrels ~ so wave the flag on 9/11 and praise our human sacrifice on that day and also pray that no one looks to deeply into that black hole of American history ~ for if they do, they will eventually connect all the dots and you and I and many others will become a sordid reminder of evil and what went wrong for America at the turn of this century."


As Andrew Sullivan comments in The Dish ~ "I want to move past this as much as CIA Chief John Brennan does. But you cannot move past it without reckoning with it, without facing up to the facts, and bringing accountability to government. Obama and Brennan refuse to do it. And by refusing to come to terms with the facts, they have left this as some kind of open debate, when it is, in fact, closed. And that opening is all we need to see torture return."

In summary, Dick Cheney is like a deadly and now dormant vampire who lives in the darkness and can only be truly eliminated by a wooden stake or the light of truth driven into his treasonous dark heart of denial ~ whereas the truth of 9/11 will finally be revealed as well as Cheney’s role in America’s greatest act of treason.


William Boardman, RSN, mirrors my own feelings when he wrote today ~ "We know who the torturer-in-chief was, and we know his vice-torturer has said George Bush was as fully informed as he, Dick Cheney, was. Along with everything else we know about these men who still defend their criminality, why isn’t that enough for probable cause and a criminal indictment?"


Let the prosecutions begin and let them start from the top down ~ there is no change without action and Americans want and can actually handle it.

Spiritual consultant Allen L Roland can be contacted at  allen@allenroland.com


Allen is also a lecturer and writer who shares a weekly political and social commentary on his web log and website allenroland.com. He is also a featured columnist on Veterans Today and  guest hosts a monthly national radio show TRUTHTALK on www.conscioustalk.net