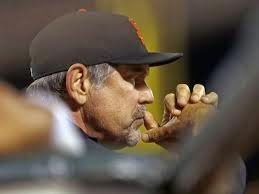 The wily fox and super motivator Bruce Bochy ponders his next move as his SF Giants won their eighth consecutive postseason elimination game over the Washington Nationals and set the stage for perhaps another World Series appearance ~ but most certainly an early and well deserved baseball Hall of Fame selection.

In this time of growing wars, conspiracies, epidemics and other uncertainties, there are some sure things to savor and one is Bruce Bochy's SF Giants making another run for the World Series championship: Allen L Roland. Ph.D

To understand why the San Francisco Giants won the World Series in 2010 and 2012 and are now a strong contender to win again in 2014 ~ you must first realize that the Giants are a reflection of their indomitable skipper Bruce Bochy who commands their immense respect and fuels their inner fire ~ especially in October with his shrewd moves and savvy baseball sense. But Bochy has leadership traits that others can also learn from.


Chester Spell, an associate professor of management at San Jose State University, says Bochy epitomizes what management consultant Jim Collins calls a "level-five leader," someone who can transform a company from good to great through a "paradoxical combination of personal humility plus professional will."


Byron Deeter is a partner at Bessemer Venture Partners, was also part of four national championship rugby teams at UC Berkeley under renowned coach Jack Clark, and he also speaks highly of Bochy.


He says managers can learn two lessons from Bochy. One is that "culture matters." Before games, you would see players jumping up and down in the dugout, just having fun. Instead of telling them to get serious for the big game ahead, "Bochy does the opposite; he allowed the team to be themselves. They really enjoy playing together and play better when they are loose and relaxed." In business, "helping establish a culture in whatever way is right for that company is time and money well spent. Team bonding activities may in some cases seem childish, like the pranks going on in the Giants' dugout," but they help when the going gets rough, he adds.


The other lesson is "team first," he says. "People joke about how baseball is an individual team sport .. Sports, like business, is full of prima donnas. But a good manager, through consistent actions, sends the message ~ we are all a unit, no one is above the team."


Deeter says Bochy's decisions not to reactivate left fielder Melky Cabrera after his drug suspension to preserve the team dynamic, and to transfer struggling starter Tim Lincecum to relief are good examples of his team first ethic. See article ~ http://www.sfgate.com/business/networth/article/What-business-can-learn-from-Bruce-Bochy-3991592.php 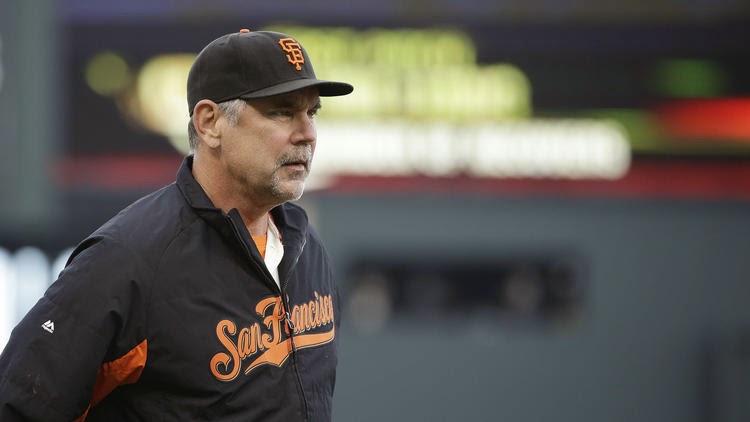 "He speaks, people listen. He's a game changer," said pitcher Jake Peavy, who played for four other managers but has a special affection for Bochy.


Bochy's peers appear to agree ~ with a recent poll of NL managers selecting Bochy as the best in the league. Then there's what the numbers say, namely that he's a Hall of Fame manager in waiting.


Of the 18 managers ahead of him on that list, 13 are in the Hall of Fame. And if the Giants win the NL pennant this season ~ they've won two of the last three ~ he'll become the 23nd manager to win more than three league championships.


The other 22 have plaques in Cooperstown.


"He's very quietly putting together a Hall of Fame career," said the Angels' Mike Scioscia, the second-winningest active manager. "When you talk about Joe Torre, about Tony La Russa, about Bobby Cox, about guys that have made it, Boch is going to be right there when it's all said and done."


But what makes Bochy special as a motivator ?

It's Bochy's no nonsense approach and rock solid temperament as well as his ability to adapt to the changing times and players.


Quite simply, Bochy cares about his players and his players know it. They play and are inspired to reach higher levels and win for him ~ and there is no better example than Hunter Pence. 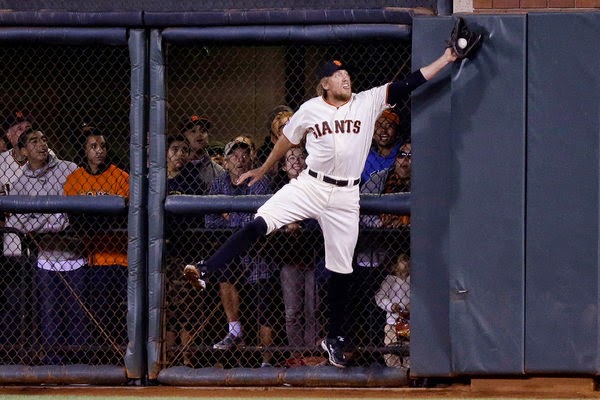 The Giants’ Hunter Pence at the outfield wall, catching a ball hit by the Nationals’ Jayson Werth to save the game. Credit Ezra Shaw/Getty Images

His players love and respect Bochy and if he is indeed the wily old wizard making all the right moves, as he did in the 2012 World Series against the Tigers, than Hunter Pence is the driving soul force of the Giants making them believe in themselves by his heroics on the field and his passionate leadership in the dugout and locker room. Buster Posey is the steady anchor of the Giants but Pence is their passion and desire.


Pence and Bochy were meant for each other because Pence personifies Bochy's deep inner drive and leads on the field by example and completely believes in his skipper ~ "He's got a lot of poise. When your leader is a rock, it leaks into your team," said Pence, who has played for five managers during his career.


I may have given up on the Giants for a short time this year, especially after they blew a nine game lead in July and I indeed had a short term fling with the A's before Billy Beane sold their soul and team leader (Cespedes) to the Red Sox for Lester, but I never gave up on Bochy who continues to amaze me with his patient leadership and baseball acumen.


Make no mistake about it, the Giants are the team to beat this year and it won't be because of their talent ~ quite simply they are all paid extremely well and have won the gold in 2010 and 2012 ~ they are the team to beat because they want to win for their grizzly old father figure Bruce Bochy who has never given up on them ~ they want Bochy in the Hall of Fame.

You heard it here first.


Allen L Roland is also a lecturer and shares a weekly political and social commentary on his web log and website allenroland.com He also guest hosts a monthly national radio show TRUTHTALK on www.conscioustalk.net