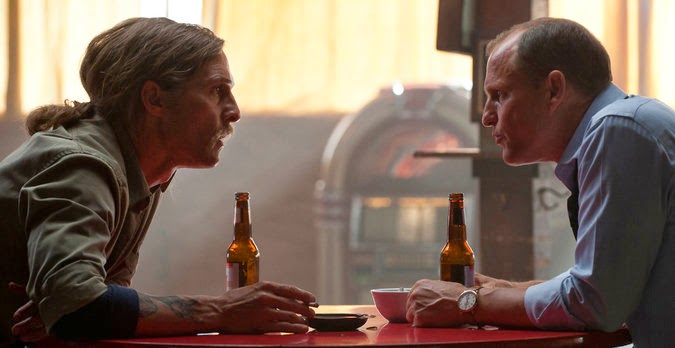 
Seldom have I seen a television series as brilliantly accomplished as HBO's True Detective. It seemed that Matthew McConaughey and Woody Harrelson inspired each other to new heights of character development. Essentially this series was about the fall and redemption of two morally fallen detectives who both reconnected to the love that was deepest within themselves in the final episode ~ after almost being killed ~ both saving each other while bonding with each other at a soul level in the process: Allen L Roland

Having worked with combat veterans with PTSD for over 4 years, many of whom were taught to kill and many with major issues of guilt, sadness and unworthiness ~ virtually all had strong bonds with their fellow warriors since all had faced the darkness and survived but had bonded with each other in the process. By touching their hearts, in my work, through gratefulness, they began to realize that those who they loved deeply were still part of them and especially their fellow warriors who did not make it ~ but were still gifts in their life.

True detective featured two battle hardened detectives, who could have well been two combat soldiers, who learned to accept and love each other while risking their lives together against a common enemy ~ who almost killed them before they each saved each other at the risk of their own life.

Of important note, as revealed in Episode 8, Marty and Rust both discovered what lay beneath their guilt and sadness issues and it was love as well as the truth of Teilhard's words ~  "Love alone is capable of uniting living beings in such a way as to complete and fulfill them for it alone takes them and joins them to what is deepest within themselves."

Both Rust and Marty , as Alessandra Stanley wrote in her New York Times review, "found meaning in life by almost dying. Marty discovered new purpose through friendship ~ sealed with the gift of Camel cigarettes. The show is called “True Detective,” but at the end it was true love that prevailed.” http://www.nytimes.com/2014/03/10/arts/television/true-detective-finds-philosophical-answers-by-seasons-end.html?emc=eta1

To me, it was Butch Cassidy and the Sundance Kid with Robert Redford and Paul Newman, but they didn't have to go down in a hail of bullets to find true redemption ~  for they found it deepest within themselves.

Here's the ending of Season 1, Episode 8, the finale of first season ~ 8 minute video


Marty and Rust have their last conversation ~ complete with credits and the last song that's played.
http://www.youtube.com/watch?v=GVlrNKtFLbM

Rust comments on his near-death experience: "There was a moment, I know when I was under in the dark, that something… whatever I'd been reduced to, not even consciousness, just a vague awareness in the dark ~ I could feel my definitions fading. And beneath that consciousness there was another kind ~ it was a deeper form ~ like a substance.


I could feel man, I knew my daughter waited for me, there.


It was like I was part of everything I have ever loved, and we were all, the three of us, just fading out. And all I had to do was let go, man.


And I did ~ I said ' Darkness, yeah' and I disappeared… but I could still feel her love there ~ even more than before ~ nothing but that love. And then I woke up …. ………… there's just one story, the oldest … light versus dark."


Marty attentively listens and comments as he looks into the night sky ~ that it appears the dark is winning but Rust is obviously now seeing through different eyes ~  "If you ask me, I think the light is winning" were Rust's final words to Marty as he looks at the night sky while being illegally wheeled away from the hospital by a willing,  accepting and loving Marty.


And guess what, the light is indeed winning ~ as I well know.


I have surrendered to the paralyzing weight of fear (and apparent death) twice ~ once as a Navy fighter pilot apparently stalling out after a night cat shot and later in life when everything I cherished was violently taken away and there was nowhere to turn. Both times I found a deep source of direction and strength within myself as well as a subtle but profound sense that my life was being divinely guided as long as I remained in heartfelt service.


We all have angels in our life and we must continually be grateful for their being and presence. Marty and Rust found one in each other ~ thus in the end, true detectives became true friends.

Allen L Roland is also a lecturer who also shares a daily political and social commentary on his web log and website allenroland.com He also guest hosts a monthly national radio show TRU
Posted by Allen L Roland, Ph.D at 10:10 AM