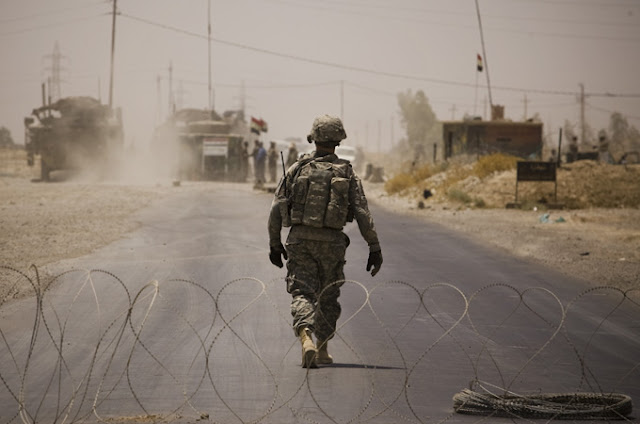 The continuation of attacks on US soldiers by uniformed Afghan soldiers and policemen is an expression of popular hatred for the occupation regime and military invasion  forces which brings to mind John Steinbeck's classic novel The Moon Is Down. Steinbeck fully captures the inner agony, shame and moral guilt of the German occupying  forces in Norway whereas the flies eventually conquer the flypaper ~ as they most assuredly will in Afghanistan: Allen L Roland

Currently over 2000 occupying troops have been killed in Afghanistan and well over 15,000 have been wounded. However, the continuation of attacks on US soldiers by uniformed Afghan soldiers and policemen is a reflection of the growing hatred of both the occupying forces and the illegal and incredibly corrupt America sponsored Karzai stooge regime.

There is good reason calling Afghanistan the graveyard of Empires ~ and the United States is heading for the same fate.

Patrick Martin, MSWS.ORG recently reported on the growing US debacle in Afghanistan as evidenced by the fact that in the last two weeks twelve US soldiers have been killed by Afghan soldiers or policemen who were supposedly their allies ~ "The latest incident brings the total of such attacks since the beginning of 2012 on US or NATO forces, dubbed “green on blue” incidents by US military spokesmen, to 32, resulting in 40 deaths. The number of soldiers wounded in such insider attacks is likely far greater, but concealed by a US-NATO policy of refusing to discuss non-fatal injuries."

Martin goes on to explain the significance of these growing attacks by Afghan individuals acting on their own ~ " this only demonstrates that hostility to the American military occupation is so widespread and deep among the Afghan population that any incident can provide the spark to provoke violent resistance. This is the case after ten years and $43 billion devoted by the US military to training an Afghan military and police force to do its bidding.
These incidents have a significance far beyond the actual death toll, since they give a glimpse of the real relationship between an oppressed population and the US-NATO occupation, now approaching the end of its eleventh year.

Martin also confirms what I have always maintained, regarding the so-called dreaded Taliban, who I maintain are in reality freedom fighters ~  " The vast majority of the Afghan population opposes the US-NATO forces and the Karzai stooge regime. Hence the endless supply of recruits for the “Taliban,” the name the US military and media apply to any and all insurgents, most of them simply poor farmers who fight in and around the rural villages where their families live."

The flies are beginning to conquer the flypaper in Afghanistan , as they did in Vietnam and Martin makes the same analogy ~ "There is a stench of decomposition over the whole US-NATO enterprise in Afghanistan. US troops are being drawn down, US equipment removed, US subsidies cut back, and the US collaborators in the Karzai regime are packing their bags—usually stuffed with cash—and checking their passports. Kabul today increasingly recalls Saigon in the final months and weeks before the collapse of the US-backed puppet regime of South Vietnam."
Read full report :  http://www.wsws.org/articles/2012/aug2012/pers-a20.shtml

PTSD, suicide and violent behavior  can be accelerated when you feel constantly hated and unwanted as we are in Iraq and Afghanistan ~ as was brilliantly depicted in the film The Hurt Locker.
You are badly mistaken if you don't realize that the inner agony and guilt of occupying a country or countries, which despise and hate us, can result in inner torture, guilt and agony and certainly lead to suicide and PTSD.

The Oscar winning film, The Hurt Locker, captures this same pervasive hatred as an Army Explosive Ordnance Disposal (EOD) Unit goes about its risky job of defusing remote-controlled improvised explosive devices ( IED's ) in Baghdad ~ while Iraqis watch and obviously hope that the devices will explode and destroy the hated occupiers.

But, if you really want to know what our troops are going through in illegally occupied Iraq and Afghanistan ~ read John Steinbeck's ' The Moon is Down ' or better yet read Paul Rockwell's poetic and moving commentary ' The Agony of Occupation / The flies have conquered the flypaper ' from Common Dreams .

Excerpt: " It is impossible to read Steinbeck's masterpiece without thinking about our own soldiers in Iraq , about their daily fear, the growing tendency for revenge, the agony of conquest. 'The Moon is Down' is not primarily about the Norwegian people, or even about the resistance. It's about the terror, the self-doubts, the slow transformation of arrogance to self-loathing, under which invaders live... 'The Moon is Down' is not about the violence; it's about the psychology of occupation. Steinbeck focuses on the inability of occupying soldiers to cope with the ingratitude of a "liberated" people. Germans trusted their leaders and expected to be greeted with flowers, not contempt. The public hatred of the occupation, not sabotage alone, destroys German morale ... When a lieutenant is upset by the hostility of the local population, his commander admonishes him: "I will not lie to you, Lieutenant. They should have trained you for this, and not for flower-strewn streets. They should have built your soul with truth, not led you along with lies. But you took the job, Lieutenant. We can't take care of your soul." The occupiers are not pacified. "Captain, is this place conquered?" "Of course," the captain replies. But the listener cracks. "Conquered and we're afraid, conquered and we're surrounded. The flies have conquered the fly paper ! "
http://www.commondreams.org/views04/0402-12.htm

This is why it never gets better in drug infested Afghanistan ~ 29 minute must see video documentary
http://www.youtube.com/watch?v=83X4wx6XYU4

So, if you really want to get a feel of what American troops go through in Iraq and in particular Afghanistan ~ watch The Hurt Locker and read Steinbeck's The Moon is Down and realize that eventually The Flies will conquer the fly paper in both Iraq and Afghanistan ~ as they most certainly did in Vietnam.

Allen L Roland is a practicing psychotherapist, author and lecturer who also shares a daily political and social commentary on his weblog and website
allenroland.com He also guest hosts a monthly national radio show TRUTHTALK on www.conscioustalk.net
Posted by Allen L Roland, Ph.D at 9:27 AM