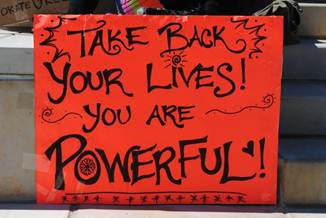 Historically Empires fall apart when an oppressed people unite and demand freedom and change. In that regard, the badly fragmented and financially weakened American empire is surely in the process of falling apart because it has essentially lost the hearts and minds of the people. Bottom up political power will always defeat military power or a police state because the Empire will eventually disintegrate from within: Allen L Roland

The National Defense Authorization Act NDAA ( Denies Individual freedom ) and HR 347 (Denies Mass Popular protest ) are the desperate acts of a corrupt and financially weakened American Empire that has lost the hearts and minds of its people and is desperately trying to protect itself from its real enemy ~ the people armed with the truth and demanding freedom and change.

In the meantime, the Occupy Movement continues to build momentum this spring and Matt Taibbi & Keith Olbermann verify this on Countdown ~ with many new people and more highly visible and vulnerable targets scheduled in 2012. Six Minute video ~ http://ampedstatus.org/occupy-moving-forward-matt-taibbi-keith-olbermann/

In essence, 2012 will eventually pit the Will of the People versus the Will of the Government (Establishment) and it will climax in Chicago ~ with the G8 and NATO meetings in May and the Republican and Democrat national conventions in late August in Tampa Bay, Florida for the Republicans and early September in Charlotte, North Carolina for the Democrats.

It really doesn’t matter whether Obama or Romney win the Presidency because both are beholden to the financial elite and the status quo. Bill Hicks brilliantly explains that hiring process in this one minute political satire ~ http://www.youtube.com/watch?v=7MRykTpw1RQ&feature=player_embedded

Both parties have sold their souls to the corporate elite (Establishment) and are rightfully held in scorn by the vast majority of the American people for one simple reason ~ The Republican and Democratic establishment no longer care what the majority of the American people feel now that the corpocracy has a vote (courtesy of the disastrous Citizens United Supreme Court Decision) and the corpocracy can quite literally buy an election.

So we find candidates speaking for their special interest groups, such as AIPAC and ignoring the will of their constituencies. Here’s a perfect example regarding the fact that assassination is not diplomacy.

Even as it remains a CONSENSUS among the 16 US intelligence agencies that there is NO evidence that Iran is seeking a nuclear weapon ~ one of our own Presidential candidates (Santorum) is busy undermining any sense of diplomacy by basically announcing “We will kill you."

It is the height of murderous arrogance to not only threaten the citizens of foreign countries with assassination ~ but also to brag that the US is willing to assassinate its OWN citizens.

It is also important to note that Anwar al-Awlaki, the US citizen assassinated by a drone strike in Yemen, dined at the Pentagon with the Secretary of the Army just months after 9/11. No mere citizen, al-Awlaki may have also been a CIA asset.

Obviously, our leaders (and that includes President Obama) are out of touch with what is important to the American people. This must be the year we take back our lives and inherent freedoms ~ for we most certainly have the power to do that and history backs up that claim.

Here are some excerpts from an interview with Jonathan Schell, author of "The Unconquerable World," on how non-violence and the quest for freedom can topple the greatest of empires ~ and will eventually topple the current American Empire. The interview was conducted on March 1, 2012 by Andy Kroll, associate editor at TomDispatch and staff reporter at Mother Jones.

Excerpt: Andy Kroll: You've written a lot before on the nuclear problem, and one feels that throughout the book. But The Unconquerable World also stands on its own as something completely original. How did you come to write this book?

Jonathan Schell: It was a long time in the making. The initial germ was born toward the end of the 1980s when I began to notice that the great empires of the world were failing. I'd been a reporter in the Vietnam War, so I'd seen the United States unable to have its way in a small, third world country. A similar sort of thing happened in Afghanistan with the Soviet Union. And then of course, there was the big one, the revolutions in Eastern Europe against the Soviet Union.

I began to think about the fortunes of empire more broadly. Of course, the British Empire had already gone under the waves of history, as had all the other European empires. And when you stopped to think about it, you saw that all the empires, with the possible exception of the American one, were disintegrating or had disintegrated. It seemed there was something in this world that did not love an empire. I began to wonder what exactly that was. Specifically, why were nations and empires that wielded overwhelmingly superior force unable to defeat powers that were incomparably weaker in a military sense?

Whatever that something was, it had to do with the superiority of political power over military power. I saw that superiority in action on the ground as a reporter for the New Yorker in Vietnam starting way back in 1966, 1967. Actually, the National Liberation Front and the North Vietnamese understood this, and if you read their documents, they were incessantly saying “politics” was primary, that war was only the continuation of politics.”

AK: How do you see the history of nonviolent action since Unconquerable World was published? What were you thinking about the Tunisian uprising, the Egyptian uprising, the Occupy movement, the general global protest movement of the present moment that arose remarkably nonviolently?

JS: I was astonished. Even now, I don’t feel that I understand what the causes were. I'm not even sure it makes sense to speak of the causes. If you point to a cause -- oppression, food prices rising, cronyism, corruption, torture -- these things go on for decades and nothing happens. Nobody does anything. Then in a twinkling everything changes. Twenty-three days in Egypt and Mubarak is gone.

How and why a people suddenly develops a will to change the conditions under which it's living is, to me, one of the deep mysteries of all politics. That’s why I don't blame myself or anyone else for not expecting or predicting the Arab Spring. How that happens may, in the end, be undiscoverable. And I think the reason for that is connected to freedom. Such changes in opinion and will are somewhere near the root of what we mean when we talk about the exercise of freedom. Almost by definition, freedom refers to something not visibly or obviously caused by anything else. Otherwise it would be compelled, not free.” See article ~ http://www.alternet.org/visions/154363

The demand for Change and freedom is in the air again and there are many spokespersons for the Occupy movement ~ including Chris Hedges and Alan Grayson ~ who are essentially truth tellers.

Here’s a video where Alan Grayson Steals the Show while explaining the Occupy Wall Street movement to a national audience on HBO's Real Time with Bill Maher, and earns the first standing ovation for a guest in the show's 10-year history ~ for just having the guts to tell the truth. Alan comes on at about the minute and a half mark. Five minute video ~ http://www.youtube.com/watch?v=mQnSu0DG3Oo

Lastly, here’s the official two minute trailer for the Four Horsemen ~ an independent cinematic feature documentary which lifts the lid on how the global economy really works as well as the consequences of unfettered growth and profit seeking, and how they have pushed humanity to the brink of moral disintegration.

Today’s Four Horsemen are defined as ~ socially organized violence; debt; iniquity; and poverty control over all of our lives. They’re gathering momentum, decimating communities and compromising future generations ~ If they are not reined in, the planet will gallop to a logical conclusion of social collapse.

By dispelling the myth that capitalism has failed ~ the Four Horsemen demonstrates how a vast majority of the world’s population have been made to pay for the greatest heist in history. Capitalism hasn’t failed ~ to the contrary ~ it has worked perfectly according to the rules the systems creators have established at the detriment to those who can least afford it ~ and at the expense of our freedoms.

The Four Horsemen film pulls together for the first time 23 of the world’s leading thinkers who have held jobs at the highest level and explains where we go from here and how we can begin to re-engage. 2 minute video ~ http://ampedstatus.org/four-horsemen-trailer-you-don%e2%80%99t-know-what%e2%80%99s-been-done-to-you/

"In the eyes of posterity it will inevitably seem that, in safeguarding our freedom, we destroyed it. The vast clandestine apparatus we built up to prove our enemies' resources and intentions only served in the end to confuse our own purposes; that practice of deceiving others for the good of the state led infallibly to our deceiving ourselves; and that vast army of clandestine personnel built up to execute these purposes were soon caught up in the web of their own sick fantasies, with disastrous consequences for them and us". Malcom Muggeridge - May 1966